On Sunday, December 4, 2022, the U.S. Transhumanist Party invited Steele Archer to announce his return to public speaking, and his future plans for creating a show that will carry on the vibrant transhumanist online discourse of previous years. After an overture on Eric Hoffer’s 1951 book The True Believer – this month’s USTP book-club selection — we reflected upon Steele’s previous prolific activity with the Debt Nation show and The Archer Report in 2019-2020, as well as how online discourse and the venues available for it have changed in the ensuing years, and what opportunities are available going forward.

During 2019-2020, Steele Archer’s shows were the predominant online platforms for transhumanist discourse and news coverage, with hundreds of episodes featuring thinkers within and adjacent to the transhumanist community and detailed, nuanced commentary on current events of relevance to transhumanism. Steele Archer provided in-depth coverage of the U.S. Transhumanist Party’s 2019 Presidential Primary and its aftermath – up to the selection of Charlie Kam as the 2020 Presidential Candidate. He then pursued and completed his postgraduate university studies and now seeks to inspire people to join and collaborate in useful and interesting ways which enhance community and personal engagement with the transhumanist movement.

See the YouTube channel for the Debt Nation show. 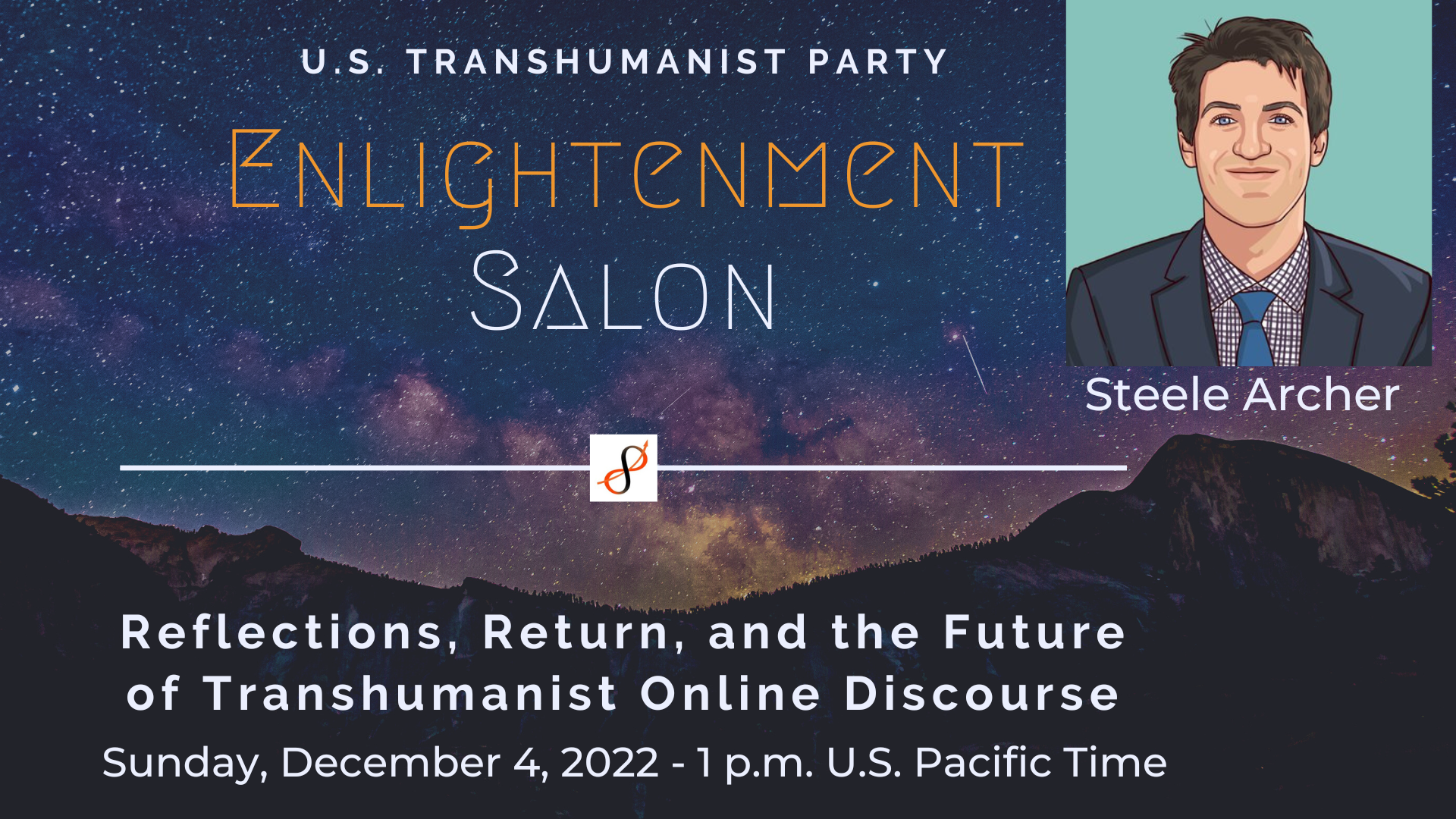 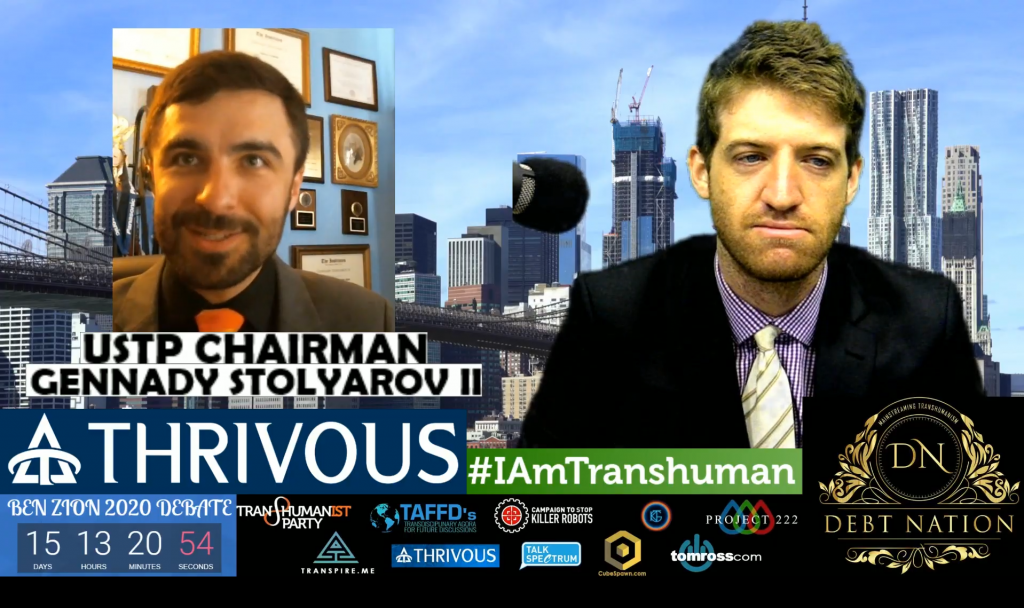 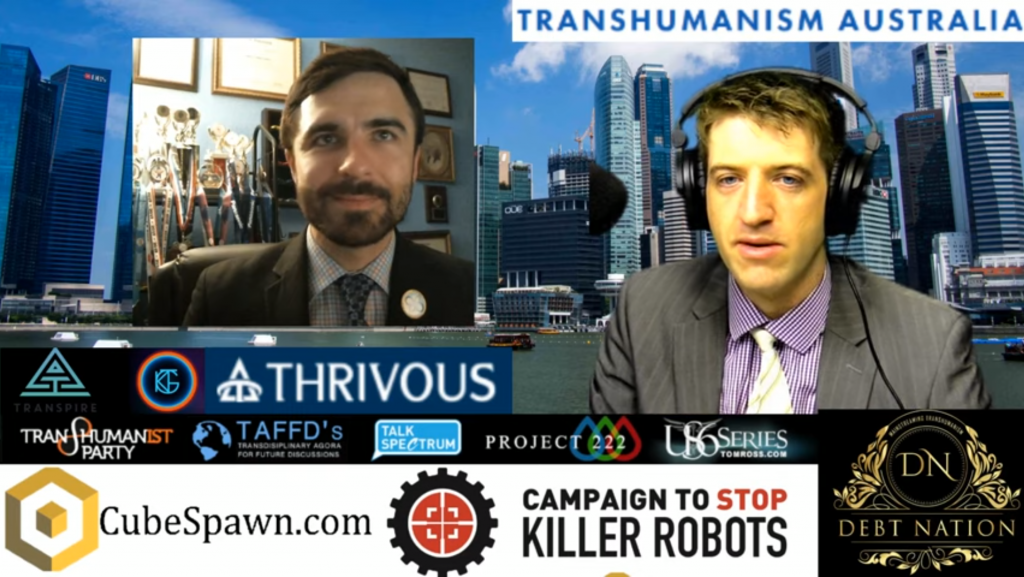 In an important conversation with Steele Archer on the Debt Nation show, which took place on October 14, 2019, U.S. Transhumanist Party / Transhuman Party Chairman Gennady Stolyarov II refutes many of the baseless, false, and malicious allegations regarding the USTP Electronic Primary election, which were made by the yellow-journalism site Biohackinfo. Watch the discussion between Mr. Stolyarov and Mr. Archer here.

In addition, many of the successes of the USTP election process were discussed, as well as possibilities for improvement and aspirations for the Ben Zion 2020 Presidential campaign. Watch this video to get the facts regarding what happened during the election, as well as what the USTP stands for and our prospects for growing the transhumanist movement in 2020 and beyond.

The USTP election was the most open and transparent process possible, with detailed disclosure of the results – including anonymized individual votes – and external validation of the results through the open-source Instant-Runoff Voting Tool. The election was honest and fair on all sides, and only genuine USTP members attempted to vote. A full report on the results can be found here, with supporting details in this spreadsheet and the input into the Instant-Runoff Voting Tool available here.

We need to reject the echo-chamber of contrived allegations and move forward by promoting transhumanism in positive ways! 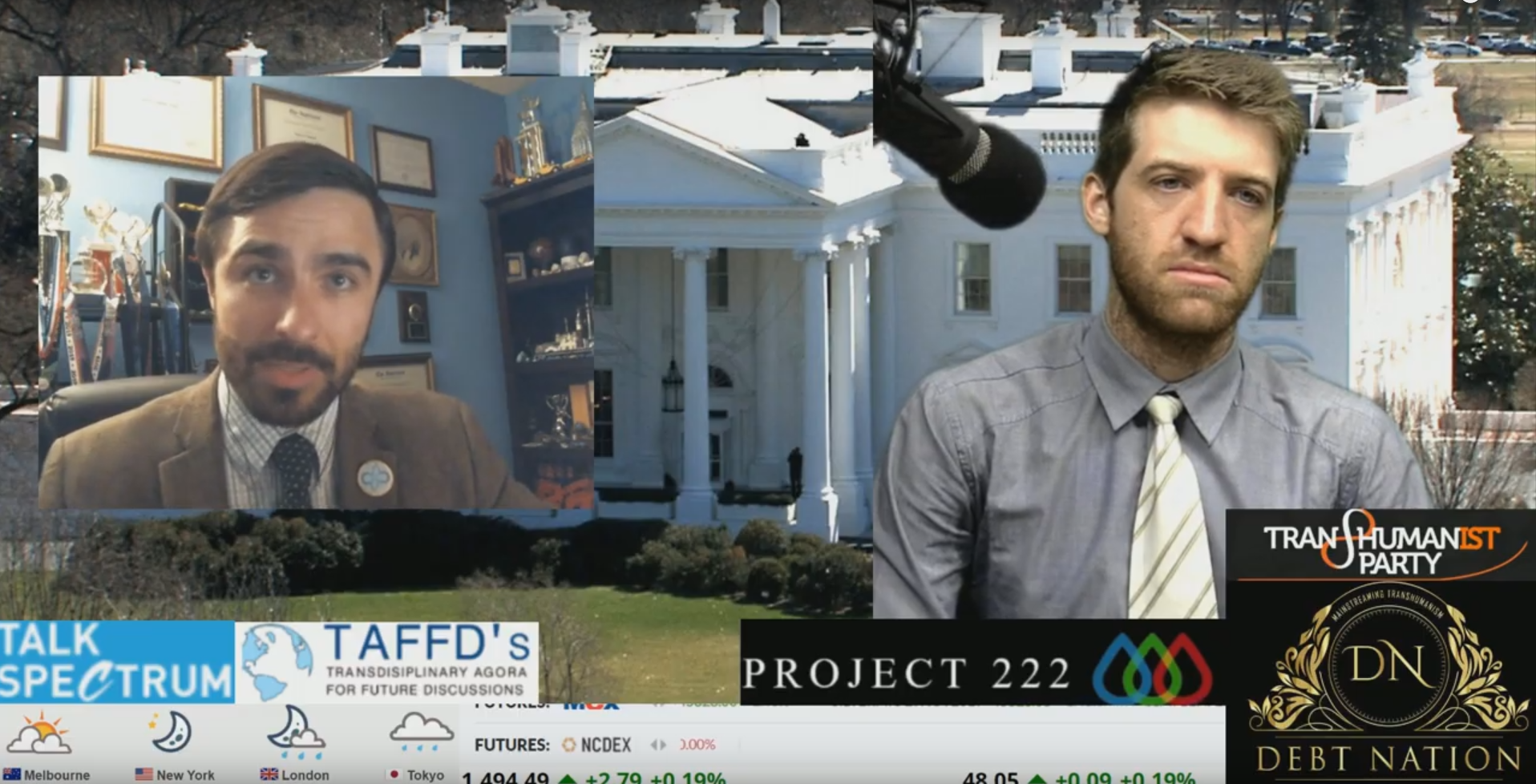 The Third Virtual Debate among the U.S. Transhumanist Party Presdidential Primary candidates has been the highest-quality and most substantive debate yet! Watch it here.

See the original debate stream on the Debt Nation show here, including the pre-debate and post-debate shows held on the same day.

View individual candidate profiles (5 of 9 candidates spoke in this debate; the remaining 4 are scheduled to speak on Tuesday, September 17, 2019):

All of the candidates were thoughtful, substantive, and contributed many excellent ideas to a complex and civil discussion. We hope for the same with the September 17, 2019, Fourth Virtual Debate among Candidates Johannon Ben Zion, Jonathan Schattke, Matt Taylor, and Vrillon! (Tune into The Unshackled YouTube channel to watch that debate live at 6:30 p.m. Pacific Time on September 17, 2019.) 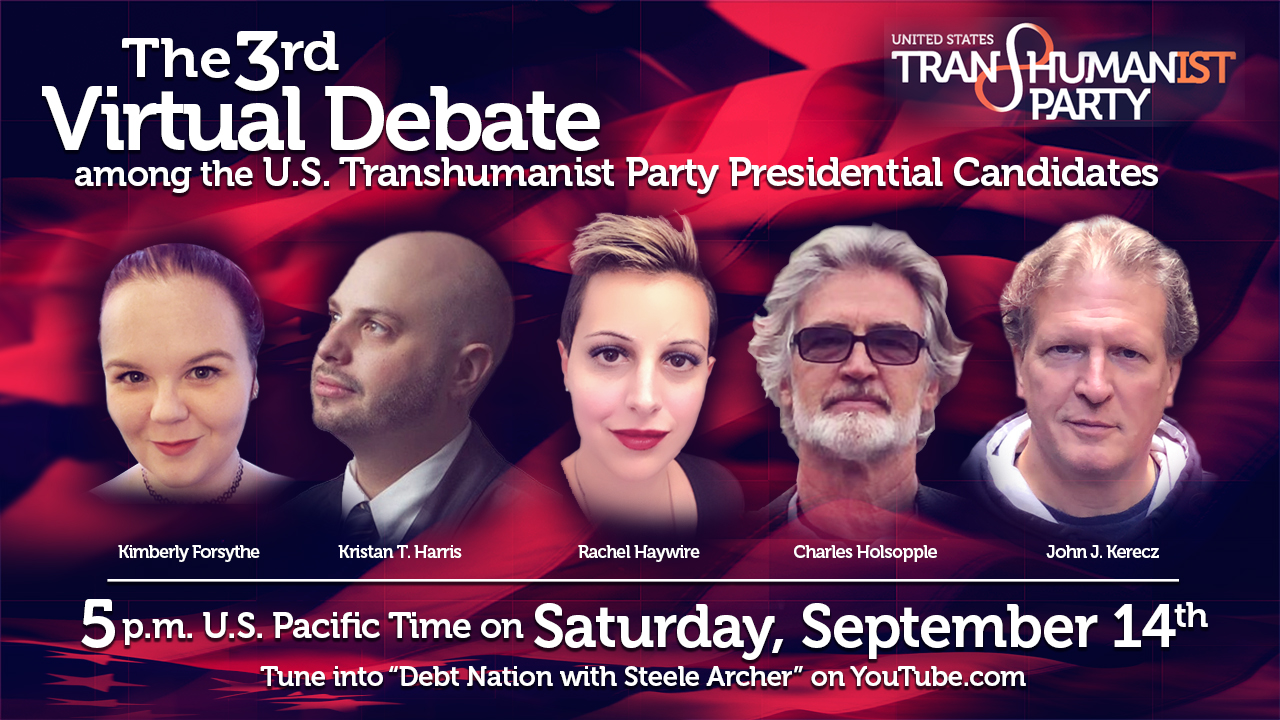 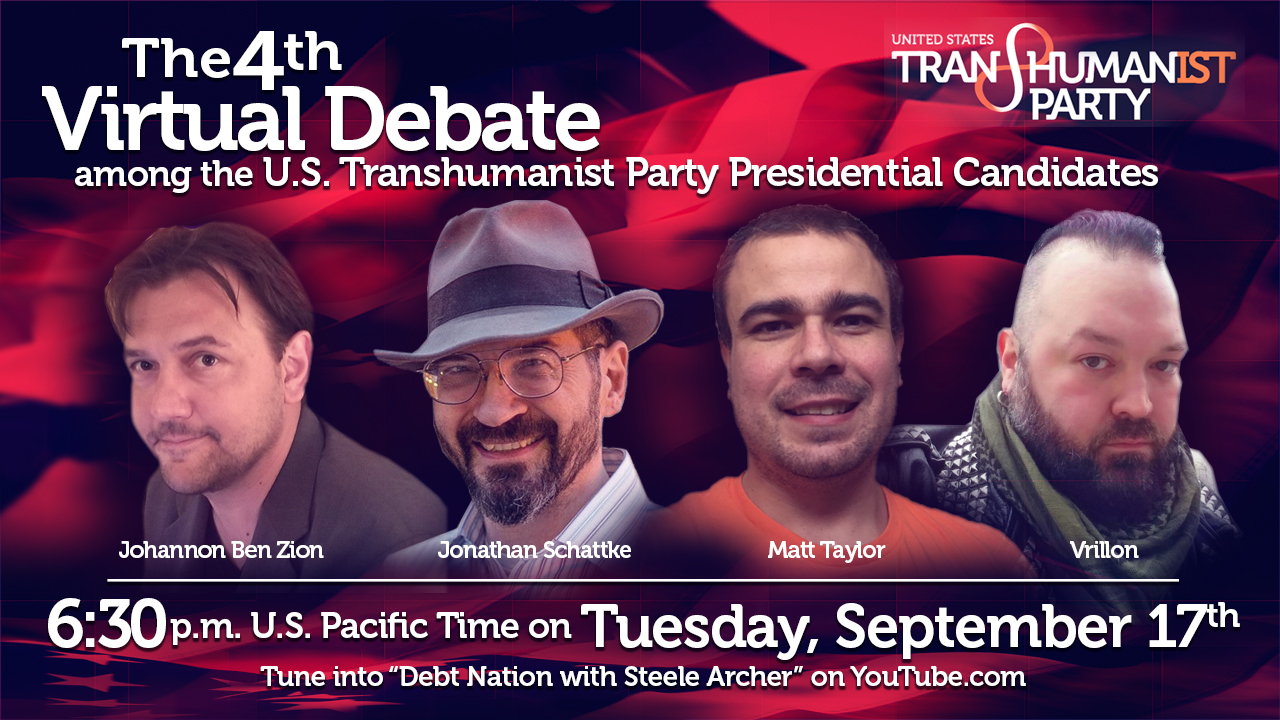 Candidates Charles Holsopple, Rachel Haywire, and Johannon Ben Zion provided updates regarding their campaigns thus far, answered challenging candidate-specific questions, addressed questions from the audience, and had the opportunity for rebuttals and interactions. In this debate, the USTP strived for maximal transparency to provide USTP members the amplest possible relevant information for them to make their decision regarding the USTP’s nominee for President of the United States during the forthcoming Electronic Primary, for which voting will open on September 22, 2019.

Steele Archer of the Debt Nation program also continuous livestreamed the debate, along with pre-debate and post-debate commentary. Watch the video of his stream here.

Join the U.S. Transhumanist Party / Transhuman Party for free, no matter where you reside. Apply in less than a minute here.

Those who join the USTP by September 21, 2019, will be eligible to vote in the Electronic Primary beginning on September 22, 2019. 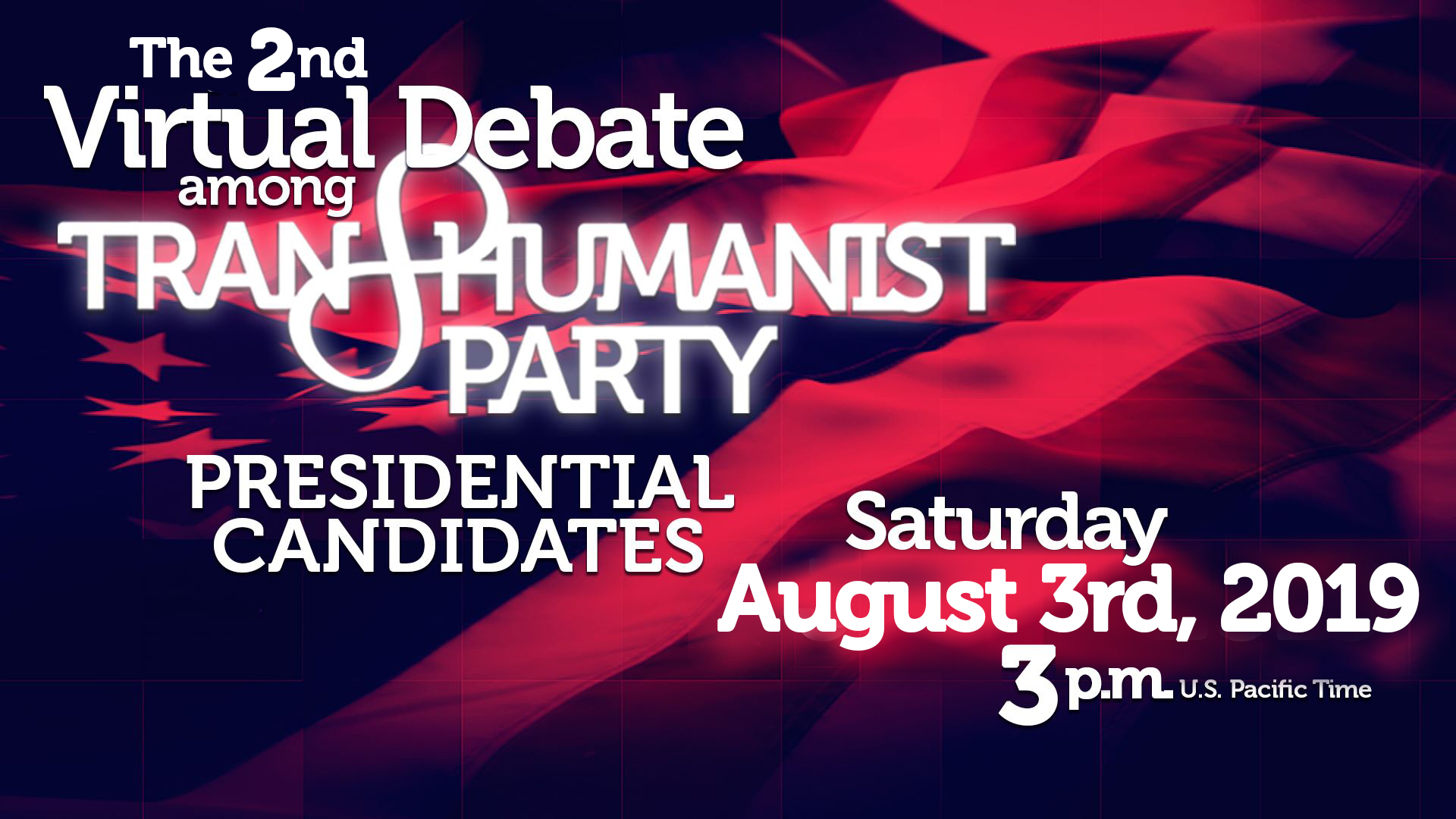 Watch this wide-ranging discussion between U.S. Transhumanist Party Chairman Gennady Stolyarov II and Steele Archer of the Debt Nation show, addressing a broad array of emerging technologies, the aspirations of transhumanism, and aspects of both broader and more personal economic matters – from the impact of technology on the labor market to how Mr. Stolyarov paid off his mortgage in 6.5 years. This conversation delved into Austrian economics, techno-optimism, cultural obstacles to progress, the work and ideals of the U.S. Transhumanist Party / Transhuman Party, life extension and the “Death is Wrong” children’s book, science fiction, and space colonization – among many other topics.