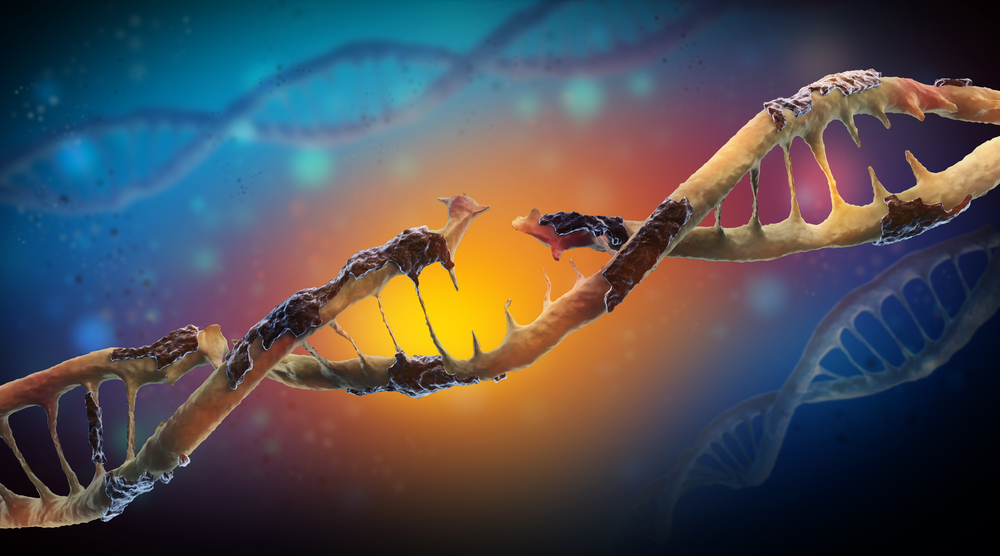 Editor’s Note: In this article, Mr. Steve Hill discusses one of the hallmarks of aging – in this case, Genomic Instability. This article was originally published by the Life Extension Advocacy Foundation (LEAF).

What is genomic instability?

The cells of your body produce a constant flow of proteins and other materials; these are built according to the blueprints contained in our DNA and are vital to cell function and survival. A large amount of information contained in the DNA is ignored during this process, and this is thought to be junk DNA, remnants of our evolutionary past that are no longer used.

However, if a part of the DNA important to cell function mutates or is damaged, the cell can experience a loss of proteostasis, in which the cell produces misfolded proteins. These misfolded proteins can be very harmful, such as when neurons in the brain produce masses of the toxic amyloid beta protein, as seen in Alzheimer’s disease.

Now, the odd dysfunctional cell is not really a huge problem; however, as we get older, an increasing number of cells succumb to this damage and begin to accumulate in tissue over time. Eventually, the number of these damaged cells reaches a point where tissue or organ function is compromised. Normally, the body removes these problem cells via a self-destruct sequence known as apoptosis, a sort of kill switch that senses the damage and destroys the cell in conjunction with the immune system.

Unfortunately, some cells evade apoptosis, taking up space in the tissue and pumping out inflammatory signals that damage the local tissue. These cells are known as senescent cells, and we will be covering them in a later Hallmarks article.

Another possible outcome of damaged DNA is cells that mutate and do not become senescent cells or destroy themselves via apoptosis. These cells continue to replicate, becoming more mutated each time they divide, and if a mutation damages the systems that regulate cell division or switches off the safety mechanisms against tumor formation, this can lead to cancer. The unchecked and rampant cell growth of cancer is probably the most well-known result of genomic instability.

There are many ways for DNA to become damaged. UV rays, radiation, chemicals, and tobacco are all examples of environmental stressors that can damage the genome. Even chemotherapy agents designed to kill cancer can also potentially cause DNA damage and senescent cells, leading to later relapse [2].

Finally, even if we avoided all the external threats to our DNA, the body still damages itself. Reactive oxygen and nitrogen species produced during the operation of normal metabolism can damage both DNA and mitochondrial DNA.

Thankfully, we have evolved a robust network of repair systems and mechanisms that can repair most of this damage. We have enzymes that can detect and repair broken strands of DNA or reverse alterations made to base pairs. This repair process is not perfect, and sometimes the DNA is not repaired. This can lead to the cell replication machinery misreading the information contained in the DNA, causing a mutation.

As mutations are passed to daughter cells, the cell tries to prevent this from happening by checking DNA integrity before and after replication. Unfortunately, some cells do manage to slip through the net.

The consequences of DNA damage

A large number of age-related diseases are linked to damaged DNA or faulty DNA repair systems. Alzheimer’s, Parkinson’s, Lou Gehrig’s disease (ALS), and cancer are all the result of genomic instability.

Another example are the progeric diseases. Progerias are congenital disorders that result in rapid aging-like symptoms and a dramatically shortened lifespan, with Hutchinson-Gilford progeria syndrome (HGPS) probably being the most well known. The disease is caused by a defect in Lamin A, a major component of a protein scaffold on the inner edge of the nucleus called the nuclear lamina. The lamina helps organize nuclear processes, such as RNA and DNA synthesis, and lamins are responsible for supporting key proteins in the DNA repair process.

This defect leads to HGPS sufferers only living until their early 20s and developing atherosclerosis, stiff joints, hair loss and wrinkles, and other accelerated aging-like characteristics.

Despite the various repair systems we have evolved, our body is constantly being assaulted from exposure to environmental stressors and even damaged through its own metabolic processes. Coupled with this, our repair systems also decline in effectiveness over time, meaning that DNA damage and mutations are inevitable.

There is some evidence to suggest that caloric restriction may help combat this, but as of now, no drugs or therapies are available yet that can prevent or repair DNA damage. The good news is human trials for DNA repair are launching this year at Harvard, and Dr. David Sinclair and other researchers are also working on their own solutions.

For the time being, the best we can do is to avoid risks, such as excessive sun exposure, industrial chemicals, smoking, and, of course, staying away from radioactive waste; there are no comic-book superpowers from these mutations!