Watch the video containing 73 minutes of excerpts from the Cyborg and Transhumanist Forum, held on May 15, 2019, at the Nevada State Legislature Building. 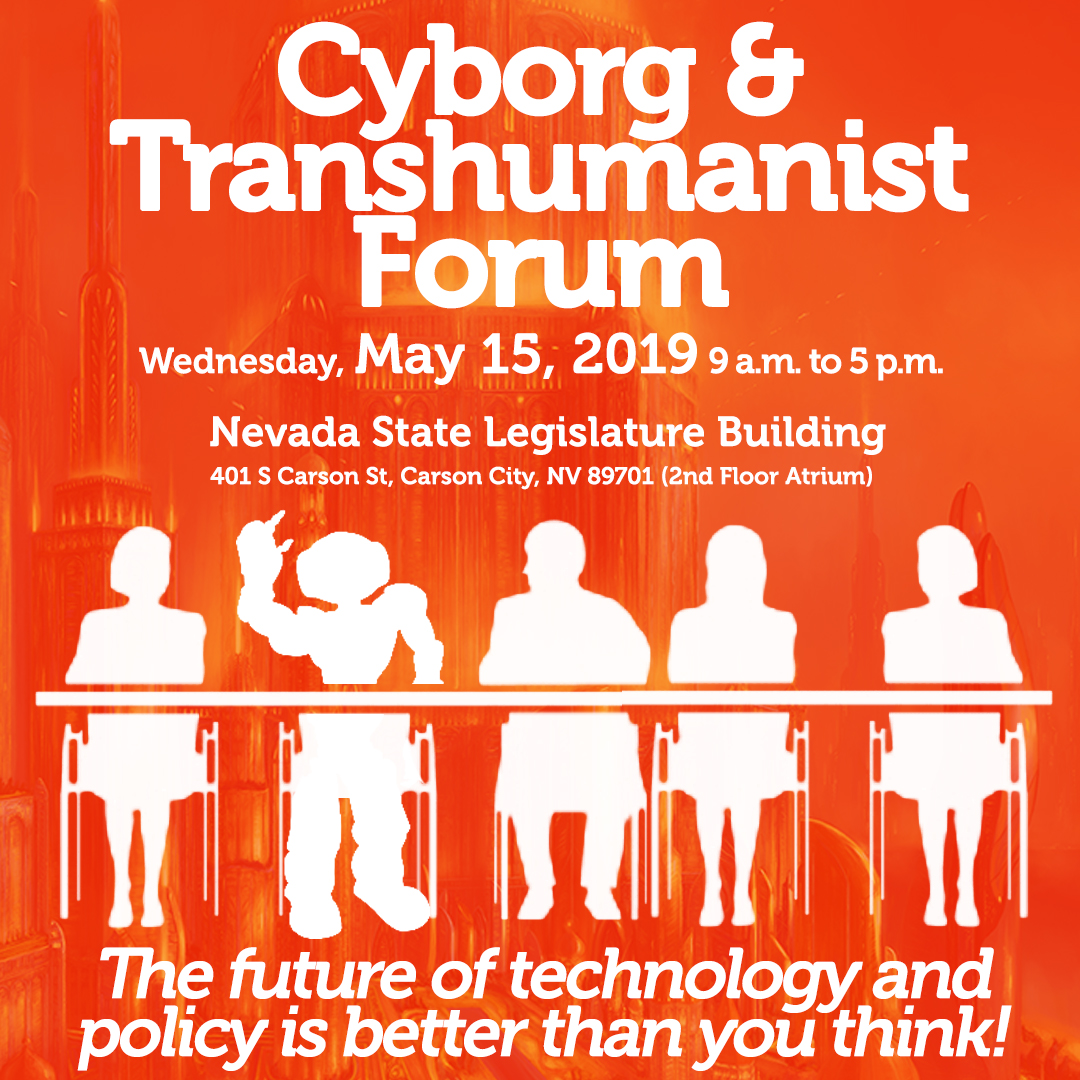 The Cyborg and Transhumanist Forum at the Nevada Legislature on May 15, 2019, marked a milestone for the U.S. Transhumanist Party and the Nevada Transhumanist Party. This was the first time that an official transhumanist event was held within the halls of a State Legislature, in one of the busiest areas of the building, within sight of the rooms where legislative committees met. The presenters were approached by tens of individuals – a few legislators and many lobbyists and staff members. The reaction was predominantly either positive or at least curious; there was no hostility and only mild disagreement from a few individuals. Generally, the outlook within the Legislative Building seems to be in favor of individual autonomy to pursue truly voluntary microchip implants. The testimony of Anastasia Synn at the Senate Judiciary Committee on April 26, 2019, in opposition to Assembly Bill 226, is one of the most memorable episodes of the 2019 Legislative Session for many who heard it. It has certainly affected the outcome for Assembly Bill 226, which was subsequently further amended to restore the original scope of the bill and only apply the prohibition to coercive microchip implants, while specifically exempting microchip implants voluntarily received by an individual from the prohibition. The scope of the prohibition was also narrowed by removing the reference to “any other person” and applying the prohibition to an enumerated list of entities who may not require others to be microchipped: state officers and employees, employers as a condition of employment, and persons in the business of insurance or bail. These changes alleviated the vast majority of the concerns within the transhumanist and cyborg communities about Assembly Bill 226. 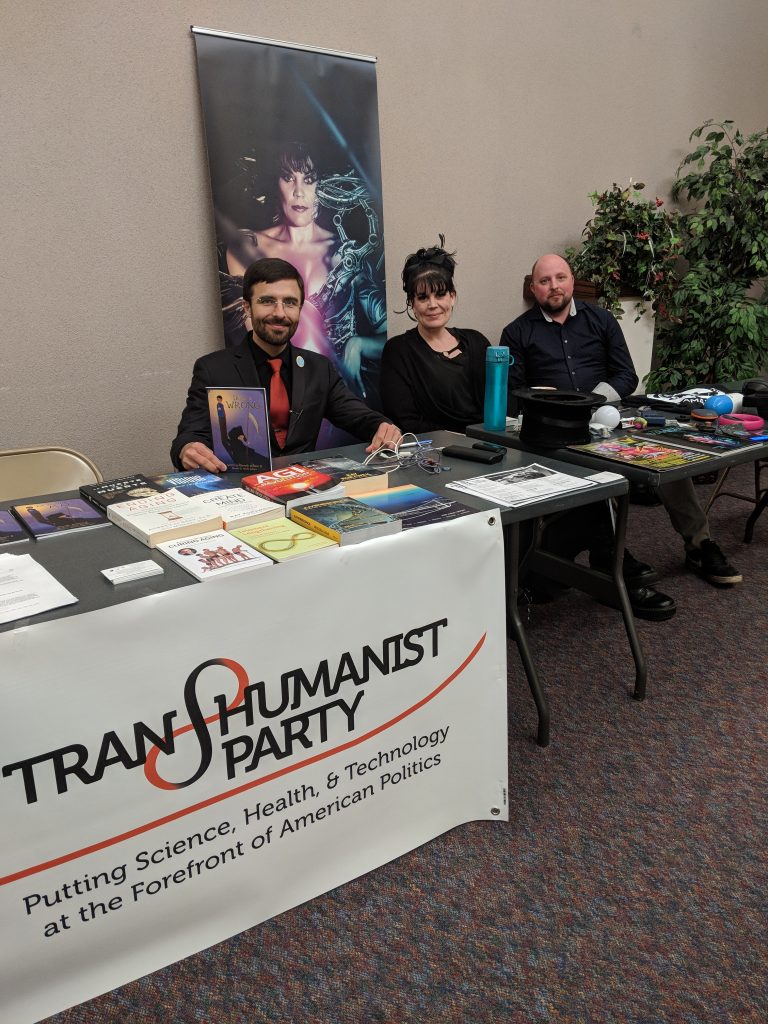 This Cyborg and Transhumanist Forum comes at the beginning of an era of transhumanist political engagement with policymakers and those who advise them. It was widely accepted by the visitors to the demonstration tables that technological advances are accelerating, and that policy decisions regarding technology should only be made with adequate knowledge about the technology itself – working on the basis of facts and not fears or misconceptions that arise from popular culture and dystopian fiction. Ryan Starr shared his expertise on the workings and limitations of both NFC/RFID microchips and GPS technology and who explained that cell phones are already far more trackable than microchips ever could be (based on their technical specifications and how those specifications could potentially be improved in the future). U.S. Transhumanist Party Chairman Gennady Stolyarov II introduced visitors to the world of transhumanist literature by bringing books for display – including writings by Aubrey de Grey, Bill Andrews, Ray Kurzweil, Jose Cordeiro, Ben Goertzel, Phil Bowermaster, and Mr. Stolyarov’s own book “Death is Wrong” in five languages. It appears that there is more sympathy for transhumanism within contemporary political circles than might appear at first glance; it is often transhumanists themselves who overestimate the negativity of the reaction they expect to receive. But nobody picketed the event or even called the presenters names; transhumanist ideas, expressed in a civil and engaging way – with an emphasis on practical applications that are here today or due to arrive in the near future – will be taken seriously when there is an opening to articulate them.

The graphics for the Cyborg and Transhumanist Forum were created by Tom Ross, the U.S. Transhumanist Party Director of Media Production. 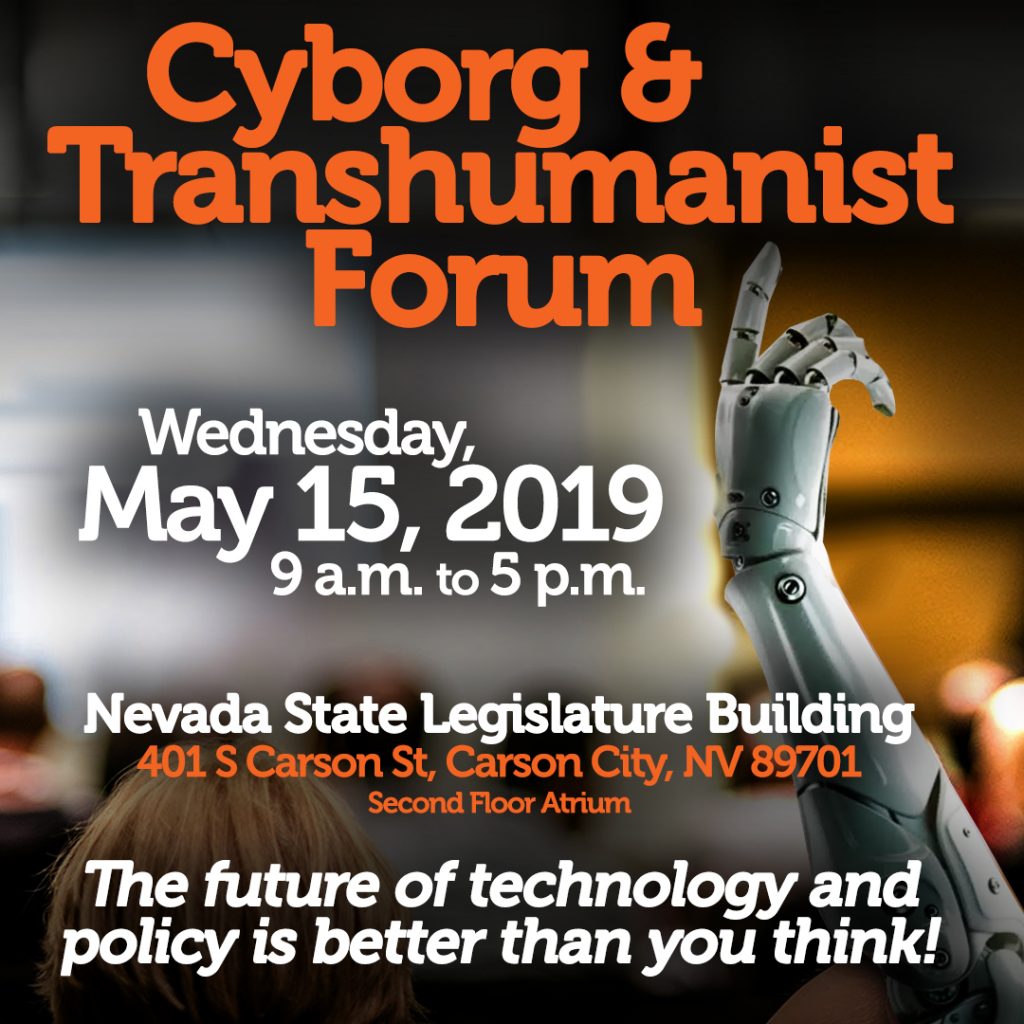 Become a member of the U.S. Transhumanist Party / Transhuman Party free of charge, no matter where you reside. 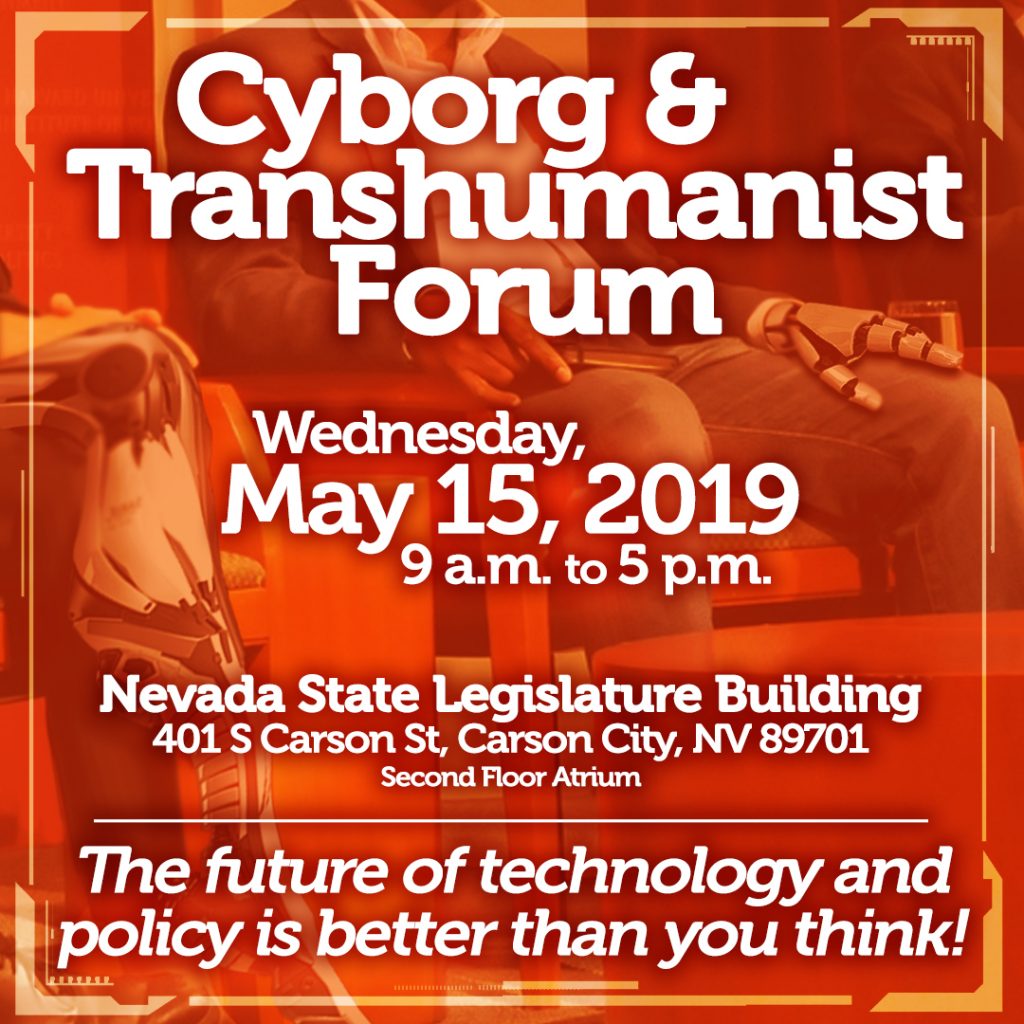 • “A Word on Implanted NFC Tags” – Article by Ryan Starr 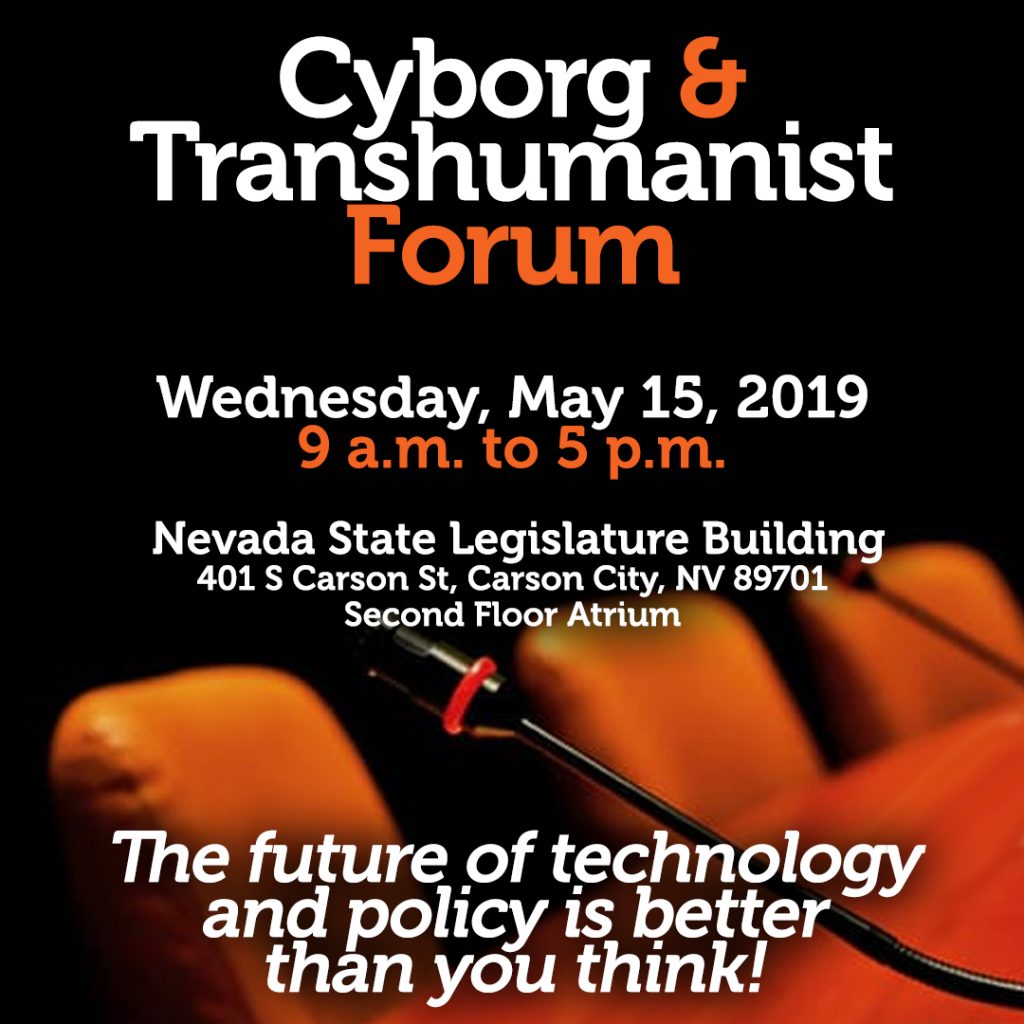 Transhumanist activism takes center stage at the Nevada Legislature: Magician and transhumanist Anastasia Synn testified on April 26, 2019, before the Nevada Senate Judiciary Committee in opposition to Nevada Assembly Bill 226 (AB 226). AB 226 would prohibit most implantation of NFC/RFID microchips, including voluntary programs for such implantation.

Ms. Synn demonstrated a variety of microchip technologies and their beneficial uses, as well as the difficulties in using voluntary implants to actually infringe on an individual’s privacy. Watch her testimony here.

The U.S. Transhumanist Party / Transhuman Party (USTP) initially raised awareness about AB 226 and its detrimental impacts in March 2019, via this article by R. Nicholas Starr: “Bait and Switch on Nevada AB226“.

The USTP, through Legislative Director Justin Waters, submitted a letter in opposition to AB 226 and encouraged others to submit public comments on the bill at the Nevada Legislature website here.

Anastasia Synn answered the USTP’s call for vocal, articulate opposition to AB 226 and testified in person at the Senate Judiciary Committee in a manner that greatly impressed the Legislators and opened them to a new world of technology.

The USTP encourages our members to continue to express their concerns on AB 226 by writing the Senate Judiciary Committee here and Assemblyman  Richard “Skip” Daly, the sponsor of AB 226, here.

Transhumanist legislative activism has made a difference; let us work to enable it to continue to do so.

Become a member of the USTP for free, no matter where you reside. Apply in less than a minute here.

The music is excerpted from Movement 4 of Symphony No. 1, Op. 86, by Gennady Stolyarov II, Chairman of the U.S. Transhumanist Party. The theme is based on Mr. Stolyarov’s Transhumanist March, Op. 78.