“All sentient entities, with the exception only of those in legal detention, have the right to private internet access without such access being prohibited or circumvented by either private corporations or governmental bureaucracy.”

Furthermore, we openly show our support for H.R. 1868 – the Restoring American Privacy Act of 2017.

The Federal Communications Commission (FCC) has been on a mission to put an end to net neutrality, a move that would be widely supported by Internet Service Providers (ISP) such as AT&T, Comcast, Verizon, and Time Warner.

You may be skeptical of net neutrality, and so am I. Instead of approaching this from a for/against argument which we’ve surely seen and endless number of articles about, let’s take a different approach.

We’re having the wrong discussion altogether. Net neutrality isn’t good or bad; it is a tool to achieve a goal – namely to prevent ISPs from abusing their often near-monopolistic position to prioritize services that are beneficial to them. These could be their own services, or third-party services that are willing to pay ISPs for prioritized access. Such a company could be Netflix for example.

Countries in Europe and Japan do not have net neutrality rules, and their internet services are, measurably, a whole lot better than those in the United States, excluding a few Eastern European countries that are still catching up on internet speeds. From this alone we might conclude that getting rid of net neutrality would be a good decision for improving internet service in the U.S. This, however, would be a very skewed and incomplete comparison.

Japan and countries in Europe and elsewhere have policies regarding ISPs that the U.S. does not. They have laws stating that network owners, those companies who own the cables in the ground, have to lease access to their network to other companies who wish to provide internet service. These laws are also often accompanied by regulations to prevent the network operators from demanding exorbitantly high lease prices. The network operators may, of course, provide internet service themselves, but they do receive competition from other ISPs who lease access from them.

ISPs in the U.S. do not have to lease network access to other ISPs who do not have their own network, which limits competition to those who own the networks, such as AT&T, Verizon (Fios), Comcast, Time Warner, and a handful of smaller providers. In many areas in the U.S. only one of these ISPs has a network in place, limiting the choice for consumers further, as they won’t have access to the other ISPs in the U.S.

Some may argue that net neutrality increases the prices for users who use the internet very little, as ISPs aren’t allowed to provide preferential treatment to certain services, or charge more for people using certain services – Netflix or YouTube for example. If we look at the ‘extra data-bucket’ prices the ISPs charge, this would seem logical until it becomes clear that transmitting a Gigabyte (GB) of data to consumers costs below $0.01. If we’d consider an internet service packet for $60 per month, the average consumer could use 6 Terabytes (TB) per month, which is 6,144 GB. To translate this to something we actually understand in terms of usage, streaming Netflix in HD on a computer uses about 3 GB per hour, meaning that in order to have an ISP make zero money on your connection would take roughly 2,000 hours of Netflix streaming per month. Roughly the same goes for watching YouTube videos in HD. We may safely say that if the average internet user would actually use this amount of data, we would have a national epidemic of video addiction.

Obviously we also have to take the internet speed (Mbps) into account. In the map below we see that there, too, prices in Europe, and Japan per 25 Mbps are lower on average than in the U.S.. 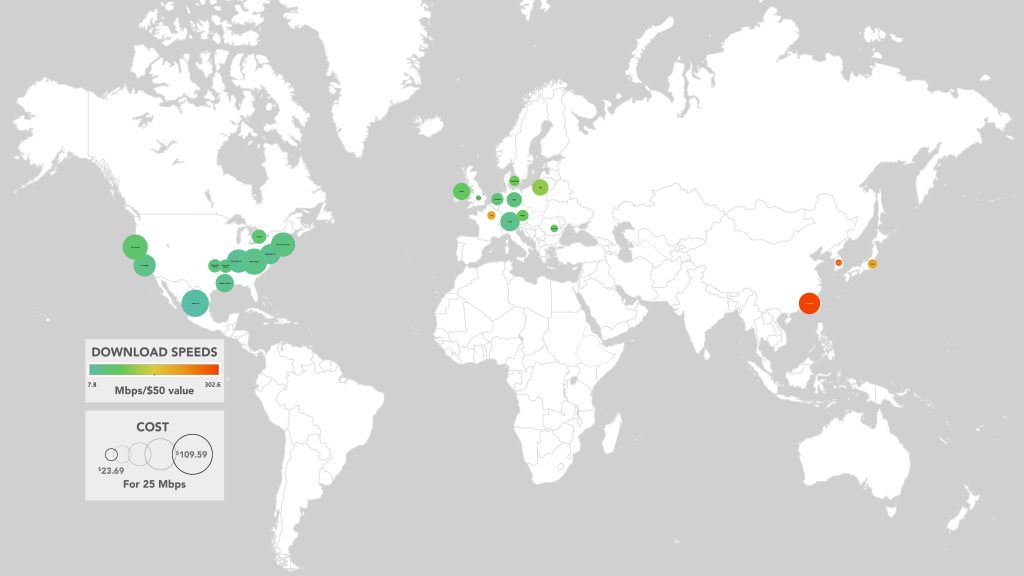 Data source for all graphics: Open Technology Institute’s 2014 Cost of Connectivity report. Graphics by Lisa Overton/PBS NewsHour. (PBS Newshour: This is how Internet speed and price in the U.S. compares to the rest of the world)

Some make the argument that net neutrality stifles innovation, and is bad for consumers. However, most ISPs in Europe, such as Tele2, use a flat-rate or fair-use policy, which means you do not have a set amount of GBs you may use per month before having to buy extra data.

From this we may draw two conclusions regarding net neutrality. Net neutrality isn’t necessary if there is healthy competition.  However, considering that many ISPs in the U.S. have a near-monopoly in any given region, and seemingly don’t consider letting others lease their networks, they have themselves to blame that net neutrality is the only realistic option to ensure free and open internet access.

Of course the U.S. ISPs would prefer to have their really large cake and eat it, too. Time Warner for example currently has a 97% profit margin on high-speed internet, and of course they’d like to increase that.

Currently the FCC net neutrality rules are the only thing standing between you and the ISPs being able to throttle or boost whichever website or online service favors them, and to create even more expensive data plans. Perhaps net neutrality is not the best option to safeguard non-discriminatory access to internet, but it is currently all we have until something better emerges.

From this standpoint we hope you will consider supporting efforts to maintain net neutrality. On July 12, there is a large-scale online protest to protect net neutrality from being undone.

To support this protest you can send a letter via the Battle for the Net page to the FCC here, which is super-easy, as they already wrote a standard letter for you. You only have to ‘sign’ it.

Martin van der Kroon is Director of Recruitment for the U.S. Transhumanist Party.