2022 is the year of the Great Filter. There has never been a more dangerous time for our species before, and there will not be again, if we survive this year.

The war in Ukraine has brought the world to the edge of nuclear calamity, because neither side wishes to negotiate or make concessions. The Russian regime makes reckless nuclear threats, Western/NATO powers recklessly ignore them, and continue to supply offensive weapons to Ukrainian forces, whose ideology favors recklessly dying for their country instead of prudently choosing to live for themselves. The risks of especially unintended, accidental escalation continue to accumulate the longer this war drags on with no clear end in sight.

The one ray of hope in all this is that I am firmly convinced that this is a unique, non-repeatable situation. If humankind can avoid extinction arising from reckless escalation here, then our species will never be in this much existential danger again, at least not from manmade causes. Here I provide my top ten reasons for holding this outlook.

1. Vladimir Putin’s misguided ideology and complete misunderstanding of the military and geopolitical situation in Russia and Ukraine led to this disaster of an invasion, but Putin is not in good health and thus his days in office are numbered. Any other person in power would not be locked into Putin’s must-win situation and may likely try to undo the damage and even try to bolster his reputation for doing so. The key is to avoid escalation while Putin remains in power, to prevent Putin from seeing no reason not to take the world down with him. If we wait this out, Putin will either succumb to his illness or be “encouraged” to retire by his inner circle. But in order to avoid the scenario where he behaves like a cornered rat, we need to allow this to happen on its own.

2. The stresses of the COVID-19 pandemic led to a uniquely insane climate of public opinion, including in the West (while also contributing to the irrationality of Putin). Norms of civility and the valuation of peace have been significantly eroded, particularly among the neoconservatives, the establishment Left, and nationalists of all stripes (Russian, Ukrainian, Polish, Baltic, et al.). Accordingly, the preponderance of warmongers among the populations of Europe and America is at a historic high. However, in the coming years, as the pandemic recedes and people gradually regain a sense of normalcy, war fervor will subside, since most of the same people were not advocating war 10 years ago and, under the right circumstances, could become largely peaceful again. Americans were overwhelmingly tired of war through 2021. If we wait this out, war fatigue will become the dominant view again not too long from now.

3. We were on the verge of the Transhuman Era circa 2015 based on the trajectories of various emerging technologies. This, however, was derailed by the Left-Right hyperpolarization from late 2015 onward, by the COVID-19 pandemic from 2020 onward, and now by the war in Ukraine in 2022. All of these developments benefited the legacy ruling elite, whom the Transhuman Era would render obsolete; they used these crises to turn ordinary people and innovators against one another, when we should have all been working in concert to build the Transhuman Era. However, if we avoid world war and nuclear annihilation now, then the progress of emerging technologies will still gradually displace the legacy ruling elite and inaugurate the Transhuman Era, at which time humans will become too prosperous and enlightened to be willing to tolerate the risk of species extinction.

4. Averting nuclear war in 2022 will lead to the widespread recognition of how close we came to calamity from the potential of a pointless local conflict to engulf the world. The phrase “Never again” will henceforth be applied to nuclear brinkmanship, and a concerted push for worldwide nuclear disarmament could be made by a coalition of activist groups who are already sympathetic to this cause. They will have a lot more political capital once people are able to take a breath and come to their senses.

5. Artificial intelligence and nanotechnology will never pose the same existential risk as nuclear weapons, because their modes of functioning are much more sophisticated, and thus there will be many more places along the chain of events leading to calamity where human intervention could stop that chain of events. AI and nanotechnology of the future will be “smart”, which will make them safer. Nuclear weapons are “dumb”, combined with awesome destructive capacity, which makes them the most dangerous technology of all history, past and future.

6. Climate change, too, is a much milder and even non-existential risk, compared to nuclear war. This is a risk that will play out over decades, allowing for mitigation and reversal through emerging technologies, as well as adaptation to any lasting climate shifts. This is not to say that climate change would inflict no damage, but rather that the damage would be far from enough to destroy the species or even significantly slow down our technological and economic progress. If we can avoid nuclear war in 2022 (which would also bring about the worst climate change of all – a nuclear winter), then it will be much more feasible to devote more resources toward the development and deployment of technologies that would counteract climate change.

7. For all of the irrational panic regarding the alleged threat of China, the fact is that China has orders of magnitude fewer nuclear weapons than Russia or the United States. The Chinese government knows that it would lose any nuclear war decisively. Hence, China will never attempt or provoke a nuclear war. When it comes to the risk of civilization-ending nuclear war, only a conflict between the United States and Russia would pose that risk. Moreover, China is so globally interconnected through trade, especially with the United States, that it would never risk a military conflict which would be tantamount to economic suicide.

8. If nuclear war is avoided in 2022, Putin’s regime will atrophy by 2025 (as long as the Western powers do not try to overthrow him or invade Russia, an attempt which would paradoxically strengthen Putin’s regime, just as the sanctions against Russia have done by rallying Russians through a sense of being attacked and targeted by the West). Once Putin’s regime atrophies and is discredited within Russia, it will be possible to support more humane politicians in Russia, who might continue the policies of Gorbachev and seek at least a phased nuclear disarmament. As noted above, among geopolitical conflicts, only the US-Russia nuclear standoff poses an existential risk to the human species. Nuclear disarmament of Russia, or even a determined move in that direction, would essentially resolve that risk.

9. With enough time during which peace prevails, the Transhuman Era will see the creation of technologies that would help avert other existential risks, such as asteroids, supervolcanoes, and any yet-unforeseen consequences of future technologies. Existential risk will decline with each peaceful year from now on.

10. Surviving 2022 will give humankind an impetus to pursue the rejection of the Cold War mentality, of militant nationalism (especially ethnic nationalism, which is the most pernicious), and of Left-Right polarization. Getting rid of those three terrible mindsets will be largely enough to render most of humankind constructive again. It is only because of those mindsets that we have not reached the Transhuman Era already. Just as the aftermath of World War II rendered certain ideologies unacceptable, so I hope that the narrow avoidance of World War III will render Cold Warriorism, Left-Right militancy, and ethno-nationalism unacceptable in America and Europe at the very least. (The rest of the world could help us in overcoming these perilous mindsets. One consequence I hope to see in the coming decades is a multi-polar world with a greater prominence for Asian, African, and Latin American countries, to broaden our perspectives on the considerations that should matter for the future of humanity.)

So, essentially we just have to survive 2022 without a nuclear war in order for history to turn toward the long arc of progress once again. However, we absolutely have to survive 2022 – and this will entirely depend on whether public opinion will be able to restrain the war fervor of Western hawks in particular. A combination of reckless overconfidence, intransigence, and moral self-righteousness (on both sides) has placed our species into unparalleled danger. Perhaps this was the kind of moment from which many alien civilizations have not been able to emerge successfully – hence, one potential explanation for Fermi’s paradox. Will we have enough prudence and basic love of life to avoid that fate? We will find out in the next several months. If we pass this Great Filter, a future of boundless possibility and growth awaits our species. Do not throw this future away over a local conflict. What humans do now will be most consequential for the future of the entire universe.

Gennady Stolyarov II is Chairman of the U.S. Transhumanist Party.

This essay may be freely reproduced using the Creative Commons Attribution Share-Alike International 4.0 License, which requires that credit be given to the author.

How can the terrible crisis in Ukraine be resolved? How can it be de-escalated in time to prevent a nuclear war and the existential threat this geopolitical situation poses to the survival of humankind? A diverse, international panel of U.S. Transhumanist Party Officers and members offered insights that, if applied, could provide some effective solutions. Watch this panel discussion on YouTube here or on Odysee here.

The discussion was recorded on March 3, 2022, and streamed on Sunday, March 6, 2022. The panelists taking part in the discussion were the following:

Find out about the U.S. Transhumanist Party leadership here. 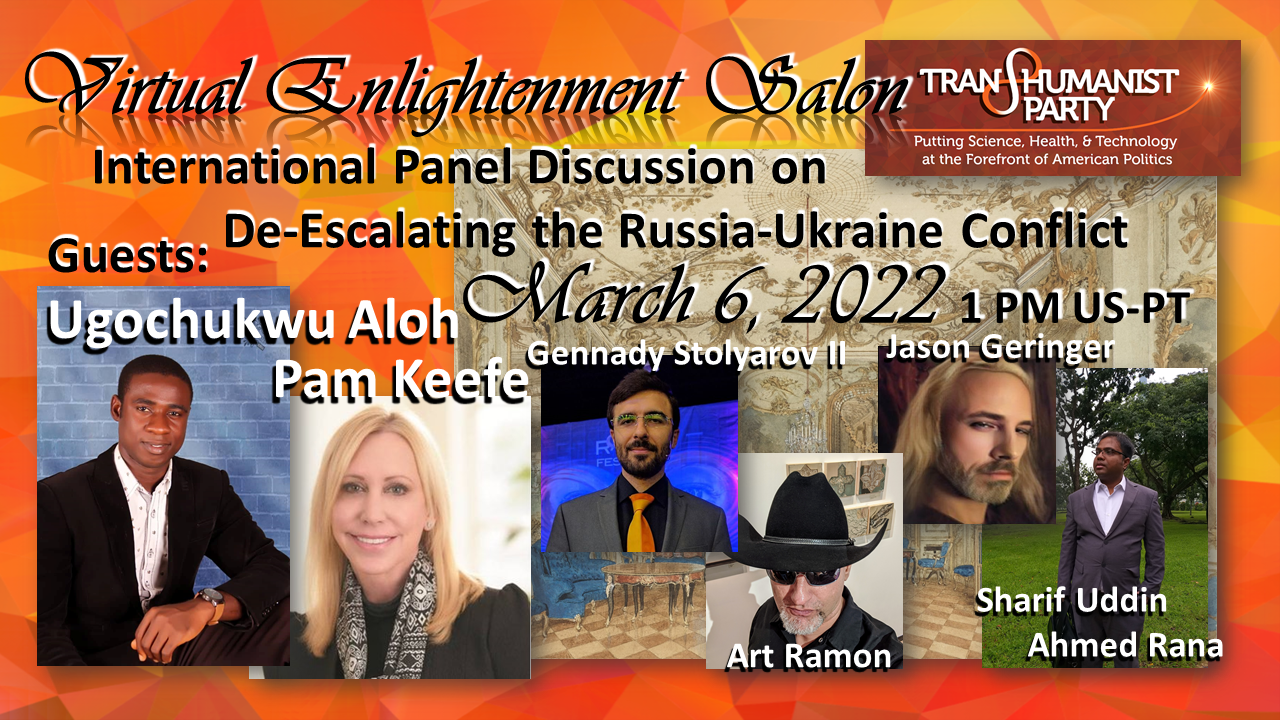 This presentation was delivered to the Young Americans for Liberty (YAL) Chapter at University of Nevada, Reno (UNR), on April 24, 2017.

Read “Antipolemus, or, the Plea of Reason, Religion, and Humanity against War” by Desiderius Erasmus.

Read the Wikipedia page on the Free Syrian Army, in particular the section entitled “Allegations of war crimes against FSA-affiliated groups”, here.

Visit the Nevada Transhumanist Party Facebook group and see its Constitution and Bylaws.

Become a member of the U.S. Transhumanist Party for free here. 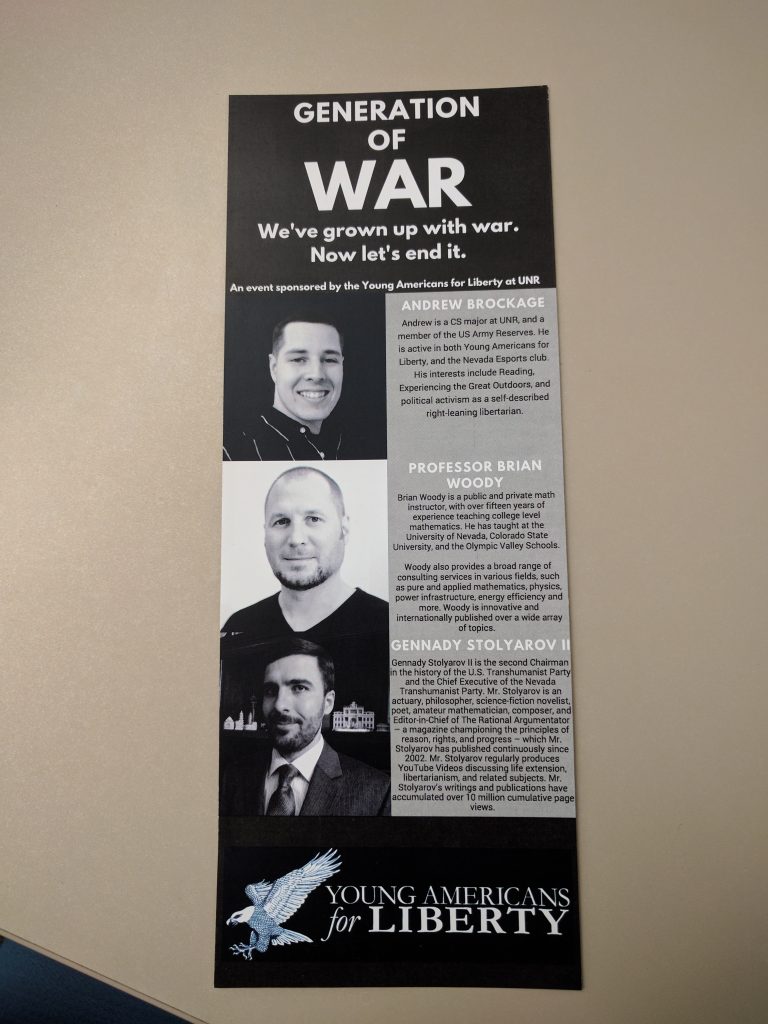