What money should be has been explored by more than one economist. What it is, strange as it may sound, is also up for debate. Yet amidst these disputes, practical and abstract, there is consensus.

At this time the entire crypto market is valued between 380 and 560 billion USD. The value of all the world’s stocks is around 70 trillion USD. The daily volume of the Forex is 5.1 trillion USD. Despite the excitement it periodically sparks in mass media and high finance circles, crypto is barely a drop in the bucket.

As I stated in my response to Robert Shiller’s critique of Bitcoin, tokenization is a means of dividing an asset. Tokenization, easily dividing an asset among stakeholders, is a strength of blockchain technology. Tokens can represent abstract entities issued on the blockchain, but they can also be tethered to a piece of real estate, a work of art, a trademark, or a freighter of Chilean copper.

A Stablecoin is related to this concept. A Stablecoin (SC) is a cryptocurrency that is pegged to fiat currency or a commodity in a fixed ratio. Stablecoins are being developed by massive corporations like JPMorgan Chase and are being looked into by governments around the world. The backing of mature institutions, whatever your opinion may be of them, can give crypto credibility and capital to move forward.

At this time cryptocurrencies are for the most part speculative toys or safe havens for those expecting for the fiat system to implode. In any case, common use remains elusive. While milk and eggs can be bought with crypto, it is not a normal occurrence. The major barrier to this is volatility.

Stability could come after a stampede into crypto by a reasonable percentage of the world’s population. Some authors have claimed an economic catastrophe could precipitate an exodus from fiat, but this seems to spring from wishful thinking – the same sort gold bugs have been indulging in for the last half century.

This is not meant as disparagement of gold or its advocates. Gold is a fine investment, but the issue at hand here is common use, something gold is not likely to readily lend itself to ever again – at least not in its most familiar forms. Several Stablecoins are currently backed by gold. By doing so, they combine the benefits of crypto with the timeless tangibility of precious metals.

Stablecoins are digital representatives of an item that may not be readily divisible and therefore inconvenient or impossible to use for daily transactions. Very few shoppers would want to overnight a tiny gold nugget to an eBay seller. Those hoping for a speedy ingress of users should consider that an equally rapid egress could follow.

Slow and steady wins the race?

While more users and more merchants could curb price swings, how and when this will happen remains an open question. If stability is not established, at least for long enough to secure investor confidence, conventional cryptocurrencies will never outgrow their reputations as dangerous playthings.

Some members of the crypto community are philosophically opposed to Stablecoins because they betray the vision of total decentralization. High ideals can clash with reality. Decentralization is not a strong selling point for most folks. It is not easy to explain beyond “no one controls it”, which is as likely to make them feel uneasy as it is to instill confidence.

It’s not as though Stablecoins are taking anything from the crypto community. Aside from bringing in new converts, they also add diversity to the cryptosphere. An orchard of identical apple trees is doomed when the right pest arrives. Monocultures are inherently weak. A diverse financial ecosystem is a resilient one. The proliferation of new blockchain projects, as overwhelming as it may be, is good for all of us.

There are a plethora of cryptocurrencies aiming to be “just” mediums of exchange. Monero (XMR), Ripple (XRP), and Dash (DASH), for all their differences, are innovating and are finding their niches. Anonymity, speed, and low transaction fees are attractive, but is it enough to convince Uncle Fred to begin buying his sweaters with them?

Although some have nuanced algorithms managing their supply, Stablecoins make crypto more understandable to the average person. Finance and technology are boogeymen to most consumers; there is no need to make either more arcane or frightening than necessary.

Adolescence is difficult because we feel pressured, from within or without, to choose a path. We are under the impression that our choices are final and our one-dimensional trajectories are set. Whether Stablecoins are a passing phase or a critical bridge to the materialization of Satoshi Nakamoto’s original vision, they seem poised to become permanent fixtures in high finance and daily life.

Adam Alonzi is a U.S. Transhumanist Party member, writer, biotechnologist, documentary maker, futurist, inventor, programmer, and author of the novels A Plank in Reason and Praying for Death: A Zombie Apocalypse. He is an analyst for the Millennium Project, the Head Media Director for BioViva Sciences, and Editor-in-Chief of Radical Science News. Listen to his podcasts here. Read his blog here. 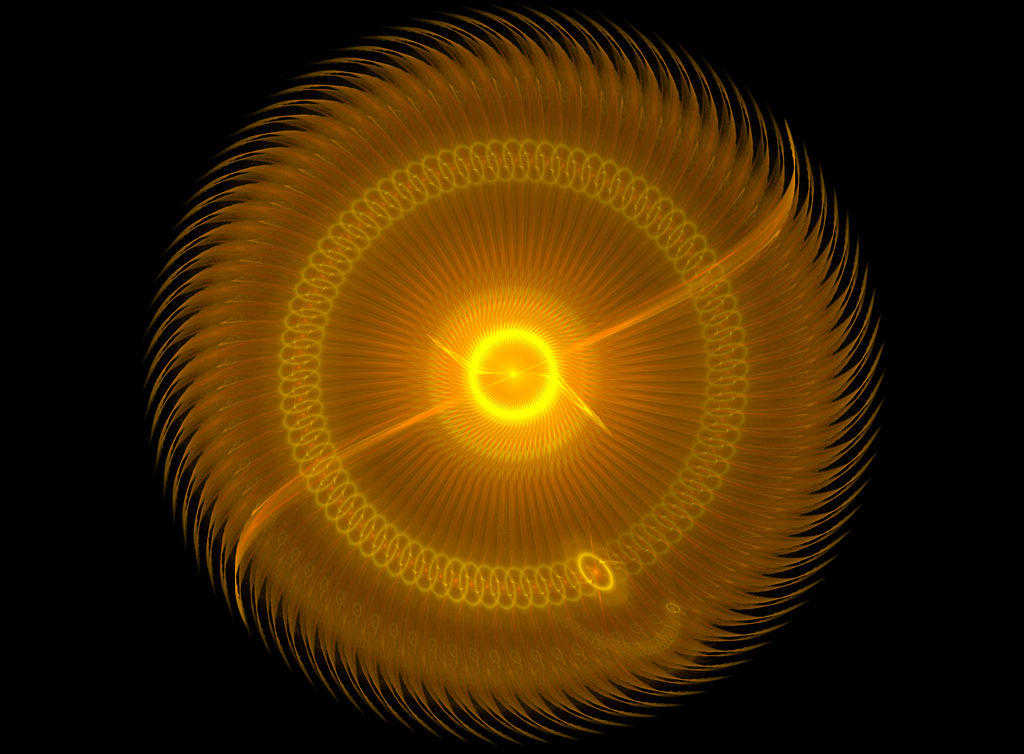 Fractal of 85 – by Gennady Stolyarov II

Note: Left-click on this image to get a full view of this digital work of fractal art.

This fractal was created by U.S. Transhumanist Party Chairman Gennady Stolyarov II as a present from one mathematician to another, based on 85-fold rotational symmetry for the 85th Birthday of his grandfather and namesake, Gennady Stolyarov I, on October 24, 2018. Notice how the rings can continue to stack along their orbit.

This digital artwork was created by Mr. Stolyarov in Apophysis, a free program that facilitates deliberate manipulation of randomly generated fractals into intelligible shapes.

This fractal is an extension of Mr. Stolyarov’s artistic style of Abstract Orderism, whose goal is the creation of abstract objects that are appealing by virtue of their geometric intricacy — a demonstration of the order that man can both discover in the universe and bring into existence through his own actions and applications of the laws of nature.

Fractal art is based on the idea of the spontaneous order – which is pivotal in economics, culture, and human civilization itself. Now, using computer technology, spontaneous orders can be harnessed in individual art works as well.