Watch this wide-ranging discussion between U.S. Transhumanist Party Chairman Gennady Stolyarov II and Steele Archer of the Debt Nation show, addressing a broad array of emerging technologies, the aspirations of transhumanism, and aspects of both broader and more personal economic matters – from the impact of technology on the labor market to how Mr. Stolyarov paid off his mortgage in 6.5 years. This conversation delved into Austrian economics, techno-optimism, cultural obstacles to progress, the work and ideals of the U.S. Transhumanist Party / Transhuman Party, life extension and the “Death is Wrong” children’s book, science fiction, and space colonization – among many other topics.

Description by Ryan O’Shea: In this installment of the Future Grind podcast host Ryan O’Shea sits down with Gennady Stolyarov II, Chairman of the US Transhumanist Party. Gennady took the reins of the Transhumanist Party when the organization’s founder, Zoltan Istvan, stepped down after his campaign for President in 2016. In addition to his work work with the Party, Gennady is a published author and composer, and he has contributed articles to the Institute for Ethics and Emerging Technologies, the Brighter Brains Institute, the Ludwig von Mises Institute, and many more. They discuss the current state of transhumanist politics, why Gennady believes that they are important in the first place, and how he feels that transhumanism can transcend socialism, libertarianism, and all other conventional ideologies.

On March 31, 2018, Gennady Stolyarov II, Chairman of the U.S. Transhumanist Party, was interviewed by Nikola Danaylov, a.k.a. Socrates, of Singularity.FM. A synopsis, audio download, and embedded video of the interview can be found on Singularity.FM here. You can also watch the YouTube video recording of the interview here.

Apparently this interview, nearly three hours in length, broke the record for the length of Nikola Danaylov’s in-depth, wide-ranging conversations on philosophy, politics, and the future.  The interview covered both some of Mr. Stolyarov’s personal work and ideas, such as the illustrated children’s book Death is Wrong, as well as the efforts and aspirations of the U.S. Transhumanist Party. The conversation also delved into such subjects as the definition of transhumanism, intelligence and morality, the technological Singularity or Singularities, health and fitness, and even cats. Everyone will find something of interest in this wide-ranging discussion.

The U.S. Transhumanist Party would like to thank its Director of Admissions and Public Relations, Dinorah Delfin, for the outreach that enabled this interview to happen.

To help advance the goals of the U.S. Transhumanist Party, as described in Mr. Stolyarov’s comments during the interview, become a member for free, no matter where you reside. Click here to fill out a membership application.

U.S. Transhumanist Party Chairman Gennady Stolyarov II was interviewed by James Strole regarding the forthcoming RAAD Fest 2017 in San Diego, California, which will occur on August 9-13, 2017. This interview addressed Mr. Stolyarov’s impressions of RAAD Fest 2016, his goals for the transhumanist movement in politics, and how various perspectives within the transhumanist and life-extensionist movement can benefit from interfacing with one another. Watch the video of the interview on YouTube or below.

. You can see the full RAAD Fest schedule here.

The panel moderated by Mr. Stolyarov will occur at 10 a.m.  on Friday, August 11, 2017. Machine augmentation of human bodies and minds will be one topic of discussion; transhumanist politics will be another. As previously announced, Mr. Stolyarov will inaugurate the panel with a brief presentation entitled “The U.S. Transhumanist Party: Pursuing a Peaceful Political Revolution for Longevity”.

Members of the U.S. Transhumanist Party: When registering for RAAD Fest, you can use the special discount code TRANSHUMAN, which will now reduce the cost of registration to $497. 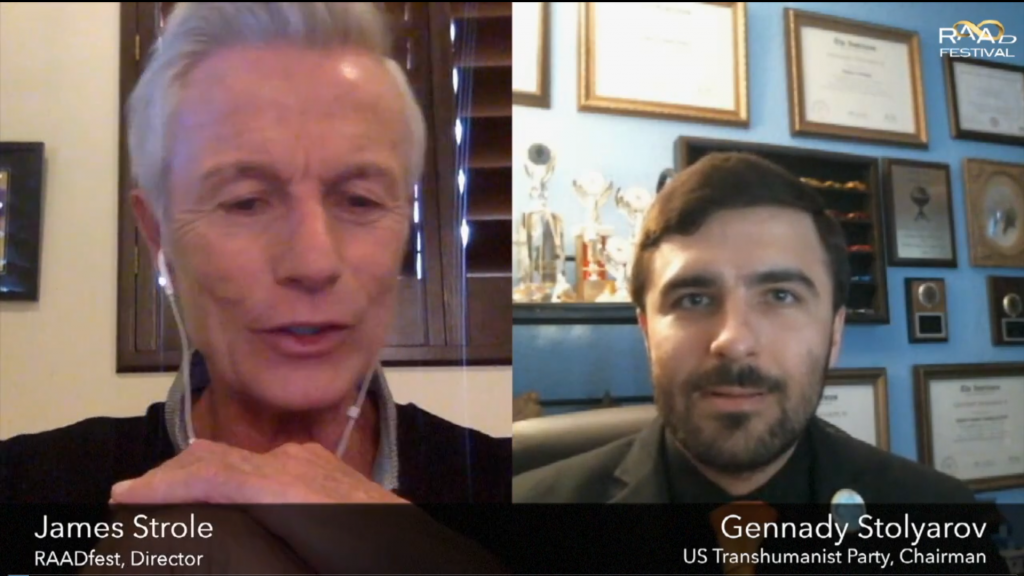