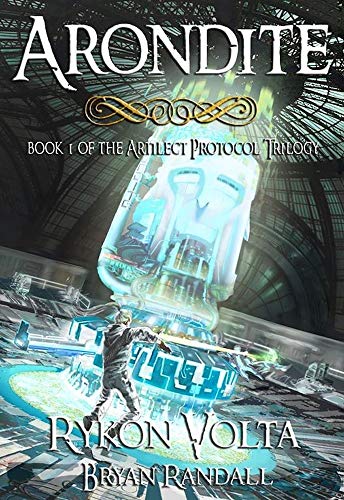 Arondite by Rykon Volta offers a fascinating exploration of a hypothetical trajectory of humankind’s future history, in which Hugo de Garis’s dire predictions of an “Artilect War” had come to pass. As in de Garis’s narrative, so in Volta’s, the anti-technological reactionary Terran faction initiates that war to assail emergent sentient artificial general intelligences and their philosophical allies, the pro-innovation Cosmists. Rather than allow such artificial general intelligences to develop, the Terran General Vantus destroys the entirety of the Earth in the year 2071 and binds the remnants of humanity to an Artilect Protocol, which imposes the harshest punishments on any humans who experiment with genetic modification, cybernetic implants, or artificial intelligence.

The story of Arondite takes place 500 years later, in 2571-2572. Humanity has, over the course of five centuries, risen slowly from the ashes of the Artilect War, and multiple competing societies and governments have taken hold in the Solar System – particularly the Martian Republic and the Jovian Empire, who are now on the edge of major war. The historical narratives at the beginning of each chapter are among the most intriguing aspects of Arondite and serve to add great depth to the world in which the events of the plot transpire. Indeed, the historical scenario presented by Volta is reminiscent of two epochs already experienced by humankind: the emergence of Classical Antiquity after a gradual recovery from the Late Bronze Age Collapse, and the rise of Medieval and then Renaissance societies after the Dark Ages following the fall of the Roman Empire. Every such recovery of civilization is a testament to human ingenuity in the face of immense adversity, and in the world depicted by Volta, the hardships of outer space certainly magnify those constraints for the remnants of humanity. Yet by developing extensive settlements both on multiple planets and in space, as well as advanced spacefaring vessels on which much of the book’s plot takes place, humans demonstrate irrepressible innovation by advancing in practically the only directions available to them. Still, the harsh boundaries imposed by the Artilect Protocol are beginning to fray, and indeed, would need to be overcome in order for further progress in the Solar System to be possible.

The protagonists of Arondite are a group of space pirates – Peron, Ashlyn, and Carlile, as well as their various and situationally shifting allies – who are quickly drawn into matters far weightier and more perilous than they could have expected, as they unwittingly find themselves at the epicenter of the struggle by multiple major powers for the Arondite Chip – a map to one of the few artilects rumored to remain. Without revealing the specific details, the plot features numerous rapid developments in this struggle – filled with shifting allegiances, sudden changes of fortune, and revelations of hidden motives which diverge from surface appearances. The reader is kept wondering throughout as to who will gain possession of the Arondite Chip – the pro-artilect Acliate Brotherhood, the Martian Republic, the Jovian Empire, the tense and ever-precarious alliance of the protagonists who must resist pressures from each of these forces, or perhaps someone else entirely. Characters from every faction, however, are united in their recognition of the vast transformational power of an artificial general intelligence; some fear it and wish to destroy it, whereas others wish to harness it for their own objectives. But will the protagonists be not only capable enough to locate this artilect, but wise enough to truly understand its capabilities and nature – and respect its autonomy?

The events of Arondite are driven strongly by all-too-familiar flaws of human character – from irrational fear to the desire for the subjugation of others to the perception of existence as a zero-sum struggle of all against all. Because of the prohibitions of the Artilect Protocol, these flaws have persisted and become endemic within the societies of 2571; after all, no fundamental improvements upon human nature had been made available via technological pathways. Thus, for all of humankind’s spacefaring progress, the aforementioned deleterious vestiges of the suboptimal evolution of the human mind had not been corrected; another major war looms on the horizon and threatens to undo centuries of hard-earned advancement. However, the rediscovery of the artilects might just open an entirely different and more hopeful set of possibilities for the future of civilization.  One can only hope that, in our own civilization, that set of possibilities can be opened much sooner and with major conflicts averted.

Through the plot of Arondite, Volta illustrates the futility of attempting to impose restrictions on technological progress – restrictions which only serve to mire humankind in an escalating war of all against all. The protagonists are thrust into such an all-encompassing struggle, but because of their relative naiveté (despite being space pirates) are able to keep their minds open to alternative possibilities and thus have a chance to bypass the numerous hostile forces and machinations standing in their way. There is a broader message contained in this kind of narrative – the ability of an earnest individual, who is not altogether experienced with “the way things are done” in a given field, to significantly influence that field and overcome institutional barriers that had hitherto prevented progress past a certain point. Both in the world of Arondite and in our world, Volta shows that the philosophy of transhumanism, with its openness to technologies that can radically transform the human condition to remedy age-old flaws, is the way forward, transcending the destructive power struggles which needlessly stunted the advancement of humanity in the past.

Gennady Stolyarov II is the Chairman of the United States Transhumanist Party.

Arondite is available on Amazon in hard-copy and Kindle formats here.