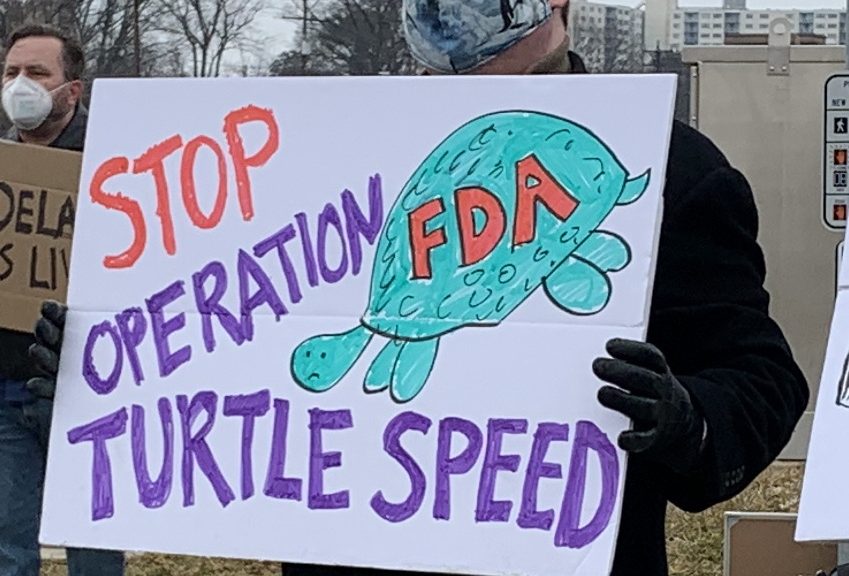 Author’s Note: This article is cross-posted from my Substack.

Preface: It’s well known that stories of people who suffer while waiting for drugs to be approved rarely get attention, while the stories of those who suffer from unexpected side effects often end up in the news and congressional hearings. There are many reasons for this. One of them is the act-omission distinction. Intuitively people tend to place much more blame on actions that result in harm rather than omissions that result in harm. Rationally though, the distinction doesn’t amount to much — a doctor that withholds a life-saving medicine, while processing knowledge that it is likely to help a patient, still commits a grave ethical injustice even if they didn’t directly cause harm. Another reason is that patients are often not aware of drugs in the pipeline that have a good chance of helping them.

It doesn’t have to be like this, though. I strongly believe those who have suffered under FDA regulatory delay should have their stories heard and appreciated. That’s why I’m so happy John Bennett attended my second #ApproveAstraZeneca #UnclogTheFDA protest outside the FDA. When I heard John’s story, I knew it deserved to be told to a wider audience. So, I had him retell the story to me so I could tell it to you here. I really appreciate John taking the time to tell me his story and proofread my writing.

When John was only around nine years old, he started experiencing joint pain. Initially his doctors thought he might have juvenile autoimmune arthritis. Around age ten, however, he was diagnosed with Crohn’s disease. Later his doctor would tell him that after that initial diagnosis he estimated his life expectancy was only nine more years.

Crohn’s disease is not just “digestive problems”. The disease affected all aspects of John’s life, and he spent much of middle and high school in and out of a wheelchair. In 2001 he started receiving infusions of the monoclonal antibody Remicade every six weeks. Due to Remicade, he started to be able to walk again and was able to live a mostly normal life. That all changed suddenly and unexpectedly in 2005 when his throat closed up after his injection. Unfortunately, as happens to many long-term Remicade patients, his body had developed an immune response to the drug. In response doctors switched him to a similar monoclonal antibody drug, Humira. However by 2013 his immune system had started rejecting the Humira as well. In response his gastroenterologist tried several general immune suppressors but at this point John was running out of good options.

Fortunately there was a new drug with a lot of clinical trials data to support it, Entyvio. Unlike Remicade and Humira, which are TNF-alpha antagonists developed for rheumatoid arthritis, Entyvio was developed specifically for Crohn’s disease and a similar disease called ulcerative colitis. Entyvio was specifically studied in Crohn’s disease patients like John who either could not tolerate or did not benefit from conventional therapy and TNF-alpha antagonists. A peer-reviewed Phase II study from 2008 showed a dose-dependent beneficial effect of Entyvio. Four Phase III studies followed. By February 2013 enough studies had been completed on Entyivio that a review article in Expert Opinion on Biological Therapy concluded the drug was “an effective and well-tolerated drug that is an important advance for the treatment of Crohn’s Disease.” Takeda Pharmaceuticals filed the paperwork for approval with the European Medicines Agency on March 7th, 2013 and filed with the FDA on June 21st, 2013.

This is where the story starts to get really dark. Throughout the summer and fall of 2013, John suffered from fatigue, joint pain, and stomach pain. His symptoms came and went in unpredictable waves, so he was never sure if he would be able to attend any social events or be able to go into work. He had to start taking a lot of leave from work, some donated from co-workers, and some unpaid.  Eventually the pain got so bad he started going to a pain clinic every two weeks, which started him on Vicodin and Percocet. His intestine was so inflamed it was shot through with holes. A persistent infection developed. His neck felt like it was in a vice and was so difficult to turn he had trouble driving.

Given John’s condition, his doctor knew he was in a race against time and that he needed Entyvio as soon as possible. As a member of the FDA’s Gastrointestinal Drugs Advisory Committee, John’s doctor had an inside view on the agency and predicted he should be able to get the drug by the end of the year. Indeed, on December 9th, 2013 the Committee voted 21-0 in favor of approving the drug for Crohn’s disease. Under normal circumstances, an approval would follow shortly thereafter. Unfortunately for John (as well as many other patients), this isn’t what happened.

Even though the FDA had granted Enyvio Priority Review Status, for the next five months the FDA kept John (and undoubtedly many others) suffering as they debated the wording for the warning label. Since the approval of earlier monoclonal antibody drugs such as Remicade and Humira, scientists learned that in the long term some patients can develop allergic reactions to treatment. The FDA wanted to put a warning about the possibility of a severe allergic reaction on the label. The problem was that the drug had been designed specifically to avoid the allergic reaction rejection problems that occurred with Remicade and Humira, drugs which did not contain such a warning. A warning about allergic reactions would make Entyvio look less safe, something that the company rightly took objection to.

Another possible reason for the delay might be related to the fact that the FDA claimed that Entyvio put patients at risk for progressive multifocal leukoencephalopathy, (PML) an often fatal brain virus. In over a decade of trials however no patient who had taken Entyvio had ever developed PML. Still, the FDA pointed to a similar drug, Tysabri, which carries a “black box” label warning of the risk for PML. The company disputed this – pointing to established mechanistic differences in how the two drugs worked, but the FDA wasn’t convinced. In the end, the FDA decided to include a warning about PML on the label and require post-market surveillance.

By April 2014 John’s condition had gotten so bad that John’s doctor started filling out compassionate use paperwork. The FDA told him not to bother and to wait for the approval. In retrospect, he probably should have tried anyway. When the drug was finally approved on May 20th, 2014, the initial doses the drug company had made had expired. The company had to manufacture new doses, leading to a delay in commercial availability. It wasn’t until September 2014 that John got the drug. By that time John was in precarious health. Although he now had the drug in his system, it was too late to help. In January 2015 his doctor sent him to the ER where he stayed in an ICU for several days fighting an infection. John had to have two major surgeries that ultimately removed his large intestine altogether.

The story illuminates many areas for improvement in the FDA approval process. First, it took five and a half years after promising Phase II results for the drug to become available to patients. Other different regulatory approaches like Free to Choose medicine or adaptive licensing could have made Entyvio available to patients faster and at lower cost. But even if you remain convinced that pre-market Phase III trials are a necessity, there are still major areas for improvement highlighted by this case.

Ideally, after the company reached their endpoints in their Phase III trials the drug would be rapidly approved within a month or two. In reality, John suffered for well over a year waiting for Entyvio to be approved by the FDA. Even after the FDA’s board unanimously voted in favor of approval, John suffered for another five months waiting for approval (the FDA could have figured out the proper warning label much earlier, for instance in the five years during which the Phase III trial was running). Even after approval, John had to wait another four months before he finally got his first dose since the initial doses had expired.

As a result of over a year of completely unnecessary delays, John became dependent on opioids, ended up in the ICU with a major infection, and had to undergo several risky surgeries. In the end though, he was lucky to have survived the ordeal. One wonders how many patients like John there were who also suffered from the delay, and how many died as a result.