It astonishes me that two years have elapsed since I became Chairman of the U.S. Transhumanist Party on November 17, 2016. Nonetheless, in retrospect, it seems that we are living in a different epoch from the one in which I stepped into this leadership role. In this epoch, transhumanism is no longer a fringe extreme; while we are a small political party, we occupy the sensible moderate ground – the civilized center of political discourse – precisely because we reject the downward spiral of toxicity, tribalism, political violence, and zero-sum partisanship which characterizes both the Democratic and Republican Parties today. Many people beyond the historic core transhumanist constituencies ought to find our message appealing, if they only knew about the Transhumanist Party and what it actually stands for.

While 2017 was a year of focusing on developing our now-extensive Platform, 2018 was characterized by increased outreach, more frequent events and interviews, steady membership growth (doubling our membership to 1,187 as of this writing), and the U.S. Transhumanist Party’s first foray into electoral politics under my Chairmanship. For a summary of our achievements in 2018, I encourage you to watch my speech at RAAD Fest 2018 in San Diego, CA, entitled “The U.S. Transhumanist Party: Four Years of Advocating for the Future” and attended by over 1,000 people.

We endorsed two candidates during this election season, James D. Schultz and myself. While Mr. Schultz fell slightly short of the 1,500 petition signatures required by New York law for ballot access, he did obtain 1,239 signatures, which shows that transhumanism can attract supporters in the four-figure range with diligent advocacy.

My own campaign for the Board of Trustees of the Indian Hills General Improvement District (IHGID) in Nevada was able to proceed to the general-election stage, since ballot access was available without the need to submit petitions. I ultimately obtained 520 votes out of 2,024 residents who cast their ballots. While I did not win a seat on the Board, 25.7% – more than a quarter – of the voters cast affirmative ballots in my favor.

While I would have preferred to win, this outcome still shows that my campaign – on which I spent no money but rather utilized social media, in-person appearances in public places, videos, and word of mouth – enabled me to reach more than a quarter of the residents after beginning with essentially zero name recognition in the area. Transhumanism, when articulated in a mainstream-friendly manner, can elicit support from people across the political spectrum and in all walks of life. We just need to continue to spread our message with determination and deliberate regarding ways of reaching constituencies who might not have become aware of transhumanism yet – perhaps because our methods of communication have not yet overlapped with their preferred media and social circles.

I am not particularly disappointed regarding the outcome of the IHGID Board election, since even getting to the stage where a Transhumanist-Party-endorsed candidate appeared on the ballot and received 520 votes constitutes major progress, since even Zoltan Istvan in 2016 had to campaign as a write-in candidate and so did not receive an official count of the votes cast in his favor. Furthermore, in my experience, the IHGID Board of Trustees is extremely open to resident input. As a resident, I have always been able to speak my mind at the Board meetings and make suggestions that have had substantive impacts. I am confident that the elected Board members are good people who have the well-being of the residents in mind, and that each of them will be receptive to at least a significant portion of my ideas in the future. Furthermore, I think this campaign helped me incrementally in the longer term to build ties with people in my community and to become more involved and able to have a voice in the many ongoing interesting developments that affect it.

From the standpoint of improving the U.S. Transhumanist Party’s political acumen, however, with a result such as the outcome of the IHGID vote, it is important to understand what happened and why and to see what this can teach about politics, the spread of information, and human dynamics more generally. 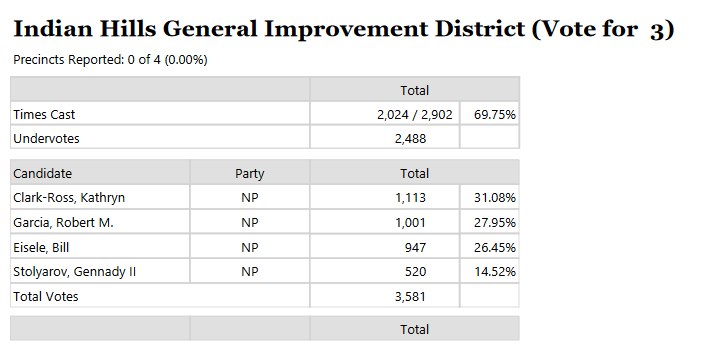 What factors could explain this outcome, to the best of my knowledge? Some of the electoral dynamics involved surprised me. Residents were able to choose up to three candidates, and it seems rather unusual to me that so few did. My calculations (which I am happy to share in greater detail upon request) indicate the following:

It is possible that some voters did not understand that they could select multiple candidates. I expected that my best outcome would arise in a situation where I would be seen as a “consensus candidate” whom other candidates would be agreeable to supporting. However, this situation could only materialize if most, or at least many, voters voted for three choices.

However, the majority of those who voted actually selected two options rather than three. This suggests that they knew their prerogatives – so the possibilities are (a) they only voted for candidates whose names they recognized; and/or (b) there could have been a coalition between some two of the candidates (I do not know which two and would have no way of knowing), who informed their supporters to support both of them but not select a third.

However, the most disappointing explanation possible (if true) is this: names were arranged in alphabetical order by last name on the ballot, and some voters might have just picked the first name or the first two or three names. This could indeed have happened in an election which was not all that controversial, where there were no “hot-button” issues, where all the candidates were on friendly terms, where very little money was spent (none on my end), and where probably many voters only minimally informed themselves about the candidates.

My campaign, based on all indications, dominated on the Internet and social media – yet there are many residents of the District who do not appear to use the Internet or social media to any great extent. All of my interactions with residents who knew of my campaign have been extremely positive, but I posit that there exists a large demographic whom my efforts did not reach because there was not any online medium to even facilitate an in-person interaction (e.g., they did not see my announcements on Nextdoor.com and did not watch the candidate videos; also, their in-person activities do not overlap with mine). How to reach such constituents is a perpetual challenge, especially because I only practice genteel campaign tactics – e.g., no door-to-door soliciting or other intrusive messaging; I let people process information at their own convenience. I hypothesize that the only real way to attain recognition from non-Internet users is to build a reputation over many years of participation in in-person community activities. The contemporary world is quite fragmented, so those activities have been rarer than I would like – but there may be more opportunities over the coming years. I raise the more general question of how transhumanists can be more effective in reaching constituencies that are not as active online as most of us technology enthusiasts. What tactics can work to build both name recognition and good will? Comments and suggestions are most welcome.

For me, my next proximate political area of focus will be continuing to build the U.S. Transhumanist Party in its national and international presence and intellectual influence. There is much effort that could be put forth in this area in the immediate future.

If you were to retain only several key insights from this message, they would be the following:

May the next year of my Chairmanship see the U.S. Transhumanist Party attain many of its goals and achieve unprecedented growth and impact for the transhumanist movement. If this happens, it will be because you, our members, will have made it happen.