In 2010, James Hughes, Executive Director of the Institute for Ethics and Emerging Technologies (IEET), having then just stepped down from the Board of Directors of the World Transhumanist Association (presently known as Humanity+), took up an interesting challenge during the Spring of that year to reflect on the current state of transhumanist thought and determine what the questions were that the transhumanist movement needed to answer in order to move forward. Introducing a series of articles with which he hoped to navigate through a number of heady ideas and issues concerning transhumanism, Hughes opens by posing: “What are the current unresolved issues in transhumanist thought? Which of these issues are peculiar to transhumanist philosophy and the transhumanist movement, and which are more actually general problems of Enlightenment thought?” Further, he queried, “Which of these are simply inevitable differences of opinion among the more or less like-minded, and which need a decisive resolution to avoid tragic errors of the past?”

Some clarification is made by Hughes on the “Enlightenment” as referring to a wide variety of thinkers and movements beginning in the seventeenth century, continuing through the early nineteenth century, and centered in Britain, France, Germany, and as increasingly demonstrated by recent scholarship, manifesting on a global dimension with significant contributions from thinkers and movements across Europe, North America, and the Caribbean. Hughes points out further the relevance of these thinkers and movements in terms of their endeavour in broadly emphasizing the capacity of individuals for achieving social and technological progress through application of critical reason to investigate nature, establish new forms and institutions of governance, and transcend such stagnating (or even retrogressive) forces as superstition and authoritarianism.

The engagement Hughes then sets for himself as he proceeded forward were a set of reflections which he was to structure around two general questions:

By addressing these questions, Hughes proposed to challenge a prevailing anti-utopian sentiment and hopefully furnish awareness of the way that dynamic optimism about transcendent possibilities motivated scientific innovation and democratic reform through the work of such thinkers and proto-transhumanists like the Marquis de Condorcet, Joseph Priestley, and J.B.S. Haldane. Indeed, for Hughes, transhumanism and techno-utopianism are part of the family of Enlightenment philosophies, both of which could be traced back to the original Enlightenment thinkers 300 years ago. The ideological conflicts within transhumanism today are, therefore, as Hughes would argue, to be understood by transhumanists as but the product of some 300-year-old conflicts within the Enlightenment itself.

The outcome of this effort, thankfully undertaken by Hughes, was a series of six essays grappling with diverse transhumanism-related issues ranging from problems surrounding the unsustainable autonomy of reason/rationality, and the belief in progress in contrast with rational uncertainty, to matters of deism, atheism and naturalist theology, from liberal democracy and technological absolutism to moral universalism and relativism, and from ideas concerning liberal individualism to the (threat of) erosion of personal identity.

Hughes titled this series of essays “Problems of Transhumanism”, each with its distinctive sub-title. And if one thing at least is to be appreciated from reading these articles, it is, in my modest opinion, the success with which they present the modern transhumanist project as bearing within its character and objective “the unfinished internal contradictions of the Enlightenment tradition.” The author, of course, emphasizes from the onset a yet important motive to his attempt which was to make clear which criticisms of transhumanism are internal contradictions, and which proceed from “external, non-Enlightenment predicates.”

Over the next week or so, I’ll be doing a review of these articles serially, starting with Part 1 below, while also incorporating some relevant views from a number of other thinkers as may be necessary, to aid commentary or analysis of Hughes’ arguments. This exercise, on my part, is essentially intended and hopefully geared to serve as an expository approach towards highlighting the contemporary philosophy and cultural movement of transhumanism whilst encouraging further discourse on the subject.

I invite and would be glad to have as many that may be interested in working through these ideas and issues with me, even as I endeavour, with these series of articles, to open conversations about them. END_OF_DOCUMENT_TOKEN_TO_BE_REPLACED

A transhumanist organization, Enlightenment Transhumanist Forum of Nigeria (ETFN) also known as H+ Nigeria, has been licensed to operate in the country. Nigeria’s Corporate Affairs Commission, the agency that is in charge of registering societies issued the license on August 7, 2018. H+ Nigeria was registered after it fulfilled all the conditions required for operation as a legal entity in the country. The objectives of the organization include the promotion of transhumanist thought and culture. The forum plans to create awareness of the radical changes and feasibility of redesigning the human condition which humanity stands to undergo through science and technology in the future.

The organization will also encourage the growth of technological culture in a broad range of emerging, sophisticated technologies. In addition, it will promote ethical principles and methods of adopting new and emerging technologies in Nigeria beyond.

Furthermore, the ETFN will advocate the moral right for those who so wish to use technology to extend their mental and physical capacities and to improve their control over their own lives. Also, it will encourage systematic research and create a forum where people can rationally debate what needs to be done and advocate for a social order where responsible decisions on transhumanist principles can be implemented. It is most exciting that such a platform for furthering the ideals of transhumanism, and other futurist philosophies, has been incorporated in Nigeria. 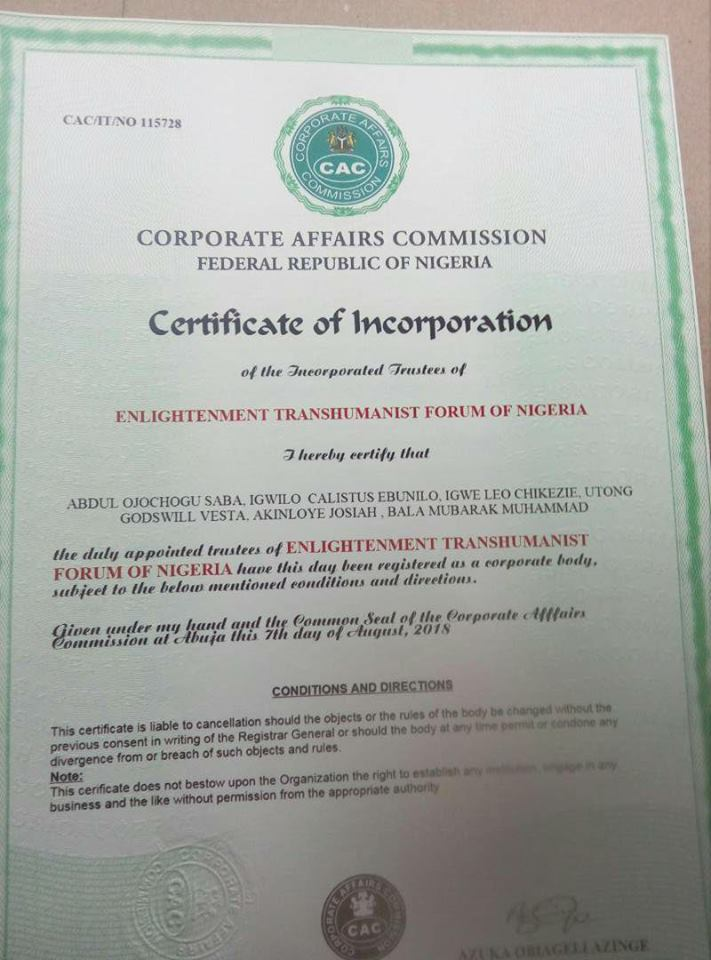