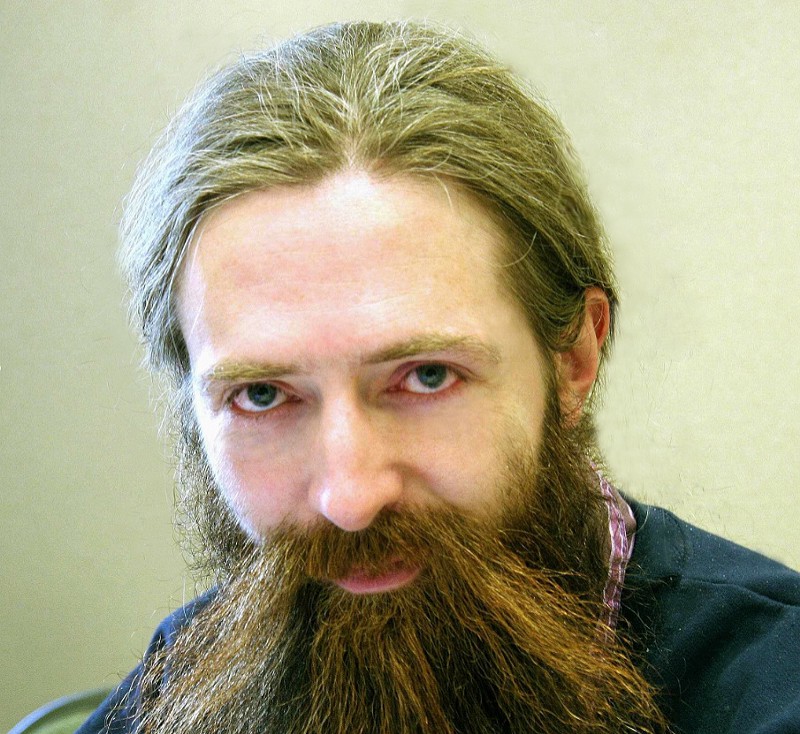 This interview was originally published here.

What is ageing? We can define ageing as a process of accumulation of the damage which is just a side-effect of normal metabolism. While researchers still poorly understand how metabolic processes cause damage accumulation, and how accumulated damage causes pathology, the damage itself — the structural difference between old tissue and young tissue — is categorized and understood pretty well. By repairing damage and restoring the previous undamaged — young — state of an organism, we can really rejuvenate it! It sounds very promising, and so it is. And for some types of damage (for example, for senescent cells) it is already proved to work!

Today in our virtual studio, somewhere between cold, rainy Saint-Petersburg and warm, sunny Mountain View, we meet Aubrey de Grey, again! For those of you who are not familiar with him, here is a brief introduction.

Dr Aubrey de Grey is the biomedical gerontologist who researched the idea for and founded SENS Research Foundation. He received his BA in Computer Science and Ph.D. in Biology from the University of Cambridge in 1985 and 2000, respectively. Dr. de Grey is Editor-in-Chief of Rejuvenation Research, is a Fellow of both the Gerontological Society of America and the American Aging Association, and sits on the editorial and scientific advisory boards of numerous journals and organizations. In 2011, de Grey inherited roughly $16.5 million on the death of his mother. Of this he assigned $13 million to fund SENS research.

Note: If you have not read “Ending Aging” yet I suggest you to do it as soon as possible, and to be more comfortable with the ideas we are discussing below I highly recommend you to read short introduction to SENS research on their web page. Also if you are interested in recent news and up-to-date reviews about [anti]ageing and rejuvenation research the best place to look for is Fight Aging! blog. Finally, if you are an investor or just curious, I highly encourage you to take a look at Jim Mellon’s book “Juvenescence”.

Aubrey de Grey: Hello Ariel — thanks for the interview.

Aubrey de Grey: 2018 was a fantastic year for rejuvenation biotechnology. The main thing that made it special was the explosive growth of the private-sector side of the field — the number of start-up companies, the number of investors, and the scale of investment. Two companies, AgeX Therapeutics and Unity Biotechnology, went public with nine-digit valuations, and a bunch of others are not far behind. Of course this has only been possible because of all the great progress that has been made in the actual science, but one can never predict when that slow, steady progress will reach “critical mass”.

Ariel Feinerman: In 2017 SENS RF have received about $7 million. What has been accomplished in 2018?

Aubrey de Grey: We received almost all of that money right around the end of 2017, in the form of four cryptocurrency donations of $1 million or more, totalling about $6.5 million. We of course realised that this was a one-off windfall, so we didn’t spend it all at once! The main things we have done are to start a major new project at Albert Einstein College of Medicine, focused on stem cell therapy for Alzheimer’s, and to broaden our education initiative to include more senior people. See our website and newsletters for details.

Ariel Feinerman: What breakthroughs of 2018 can you name as the most important by your choice?

Aubrey de Grey: On the science side, well, regarding our funded work I guess I would choose our progress in getting mitochondrial genes to work when relocated to the nucleus. We published a groundbreaking progress report at the end of 2016, but to be honest I was not at all sure that we would be able to build quickly on it. I’m delighted to say that my caution was misplaced, and that we’ve continued to make great advances. The details will be submitted for publication very soon.

Aubrey de Grey: Yes, basically. SENS is a divide-and-conquer approach, so we can view it in three overlapping phases. The first phase is to get the basic concept accepted and moving. The second phase is to get the most challenging components moving. And the third phase is to combine the components. Phase 1 is pretty much done, as you say. Phase 2 is beginning, but it’s at an early stage. Phase 3 will probably not even properly begin for a few more years. That’s why I still think we only have about a 50% chance of getting to longevity escape velocity by 2035 or so.

Ariel Feinerman: Even now many investors are fearful of real regenerative medicine approaches. For example pharmacological companies which use small molecules, like Unity Biotechnology, received more than $300 million, in much more favour than real bioengineering companies like Oisin Biotechnologies, received less than $4 million, even though the biological approach is much more powerful, cheap, effective and safe! Why is this so in your opinion, and when can we see the shift?

Aubrey de Grey: I don’t see a problem there. The big change in mindset that was needed has already occurred: rejuvenation is a thing. It’s natural that small-molecule approaches to rejuvenation will lead the way, because that’s what pharma already knows how to do. Often, that approach will in due course be overtaken by more sophisticated approaches. Sometimes the small molecules will actually work well! It’s all good.

Ariel Feinerman: Do you agree that the small-molecule approach is generally the wrong way in the future rejuvenation therapies? Because they have many flaws — especially their main mechanism via interference with human metabolism. Unlike them SENS bioengineering therapies are designed to be metabolically inert — because they just eliminate the key damage, they do not need to interfere with metabolism, so it is much easier than usual to avoid side effects and interactions with other therapies. They just eliminate the key damage, which means they are easier to develop and test — and much safer.

Aubrey de Grey: Ah, no, that’s too simplistic. It’s not true that small molecules always just “mess with metabolism” whereas genetic and enzymatic approaches eliminate damage. Small molecules that selectively kill senescent cells are absolutely an example of SENS-esque damage repair; the only thing against them is that it may be more difficult to eliminate side-effects, but that’s not because of their mode of action, it’s because of an additional action.

Ariel Feinerman: In recent years many countries gave the green light for regenerative medicine. Fast-track approval in Japan, for example, allows for emerging treatments to be used so long as they have been proven safe. The similar approach works in Russia. What about the EU or USA?

Aubrey de Grey: There’s definitely a long way to go, but the regulatory situation in the West is moving in the right direction. The TAME trial has led the way in articulating an approvable endpoint for clinical trials that is ageing in all but name, and the WHO has found a very well-judged way to incorporate ageing into its classification.

Ariel Feinerman: Do you think of working with USA Army? As far as we know they conduct research on regeneration and are very interested in keeping soldiers healthier for longer. And they have much money!

Aubrey de Grey: The Department of Defense in the USA has certainly funded a lot of high-impact regenerative medicine research for many years. I’m sure they will continue to do so.

Ariel Feinerman: Is any progress in the OncoSENS programme? Have you found any ALT genes? Is any ongoing research in WILT?

Aubrey de Grey: No — in the end that program was not successful enough to continue with, so we stopped it. There is now more interest in ALT in other labs than there was, though, so I’m hopeful that progress will be made. But also, one reason why I felt that it was OK to stop was that cancer immunotherapy is doing so well now. I think there is a significant chance that we won’t need WILT after all, because we will really truly defeat cancer using the immune system.

Ariel Feinerman: Spiegel Lab has recently published an abstract where they say they have found 3 enzymes capable of breaking glucosepane. Very exiting info! When can we hear more on their research? Revel LLC is a very secretive company.

Aubrey de Grey: They aren’t really being secretive, they are just setting up.

Ariel Feinerman: When can we see the first clinical trial of glucosepane breaker therapy?

Aubrey de Grey: I think two years is a reasonable estimate, but that’s a guess.

Ariel Feinerman: What do you think of the Open Source approach in rejuvenation biotechnology? The computer revolution in the early 2000s has taken place only because Open Source caused an explosion in software engineering!

We have many examples when Big Pharma buys a small company which has patents on technology and then cancels all research. In the Open Source approach you cannot “close” any technology, while everyone can contribute, making protocol better and everyone can use that without any licence fee! Anyway, there are countries where you cannot protect your patents. Maybe it will be better to make technology open from the beginning?

Famous biohacker Josiah Zayner said: “In the gene therapy world most treatments are easy to replicate or pirate because you can reverse engineer the DNA from scientific papers or patents. Same exact treatment, same purity and quality I could give to someone rejected from the clinical trial. The cost? Hundreds or a few thousand dollars at most. Same deal with immunotherapy.”

Aubrey de Grey: I think you’ve pretty much answered your own question with that quote. The technologies that will drive rejuvenation are not so easy to suppress.

Ariel Feinerman: Is the SENS RF going to begin new research programmes in 2019?

Aubrey de Grey: Sure! But we are still deciding which ones. We expect that our conference in Berlin (Undoing Aging, March 28–30) will bring some new opportunities to our attention.

Ariel Feinerman: What are your plans for 2019?

Aubrey de Grey: I’d like to say less travelling, but that doesn’t seem very likely at this point. Really my goal is just to keep on keeping on — to do all I can to maintain the growth of the field and the emerging industry.

Ariel Feinerman: Thank you very much for your answers, hope to see you again!

Ariel VA Feinerman is a researcher, author, and photographer, who believes that people should not die from diseases and ageing, and whose main goal is to improve human health and achieve immortality. If you like Ariel’s work, any help would be appreciated via PayPal: arielfeinerman@gmail.com.

One thought on “Finally, Rejuvenation is a Thing! – Fresh Interview with Aubrey de Grey by Ariel VA Feinerman”