Editor’s Note: The U.S. Transhumanist Party features this article by Keith Yu as part of its ongoing integration with the Transhuman Party. This article was originally published on the Transhuman Party website on June 1, 2018, and discusses Mr. Yu’s experiences meeting with Democratic technoprogressive Presidential candidate Andrew Yang. The U.S. Transhumanist Party has not endorsed Andrew Yang as of this publication and would not endorse a candidate running for either of the major U.S. political parties, but we do consider our website  to be a place where members can discuss political issues and candidates relevant to transhumanism from a multiplicity of viewpoints so as to encourage conversations about desirable policies as well as which candidate(s) the U.S. Transhumanist Party  could consider endorsing for the 2020 election season.

I walk into the back room of the San Francisco Mission district’s Tacolicious Wednesday evening with a purpose. I am here for a meet and greet with 2020 presidential candidate Andrew Yang and I am armed – with questions. Questions derived from the past few months researching this man whose values seem to so naturally align with my own. Questions from myself as well as from the Transhumanist community at large.

Andrew greets me with a warm smile and a hand. Keith Yu, I introduce myself, of the Transhuman Party. He is interested, but inquisitive, and asks me what Transhumanism is about. I tell him that we envision a future-proofed human race that will thrive as we head towards the future. 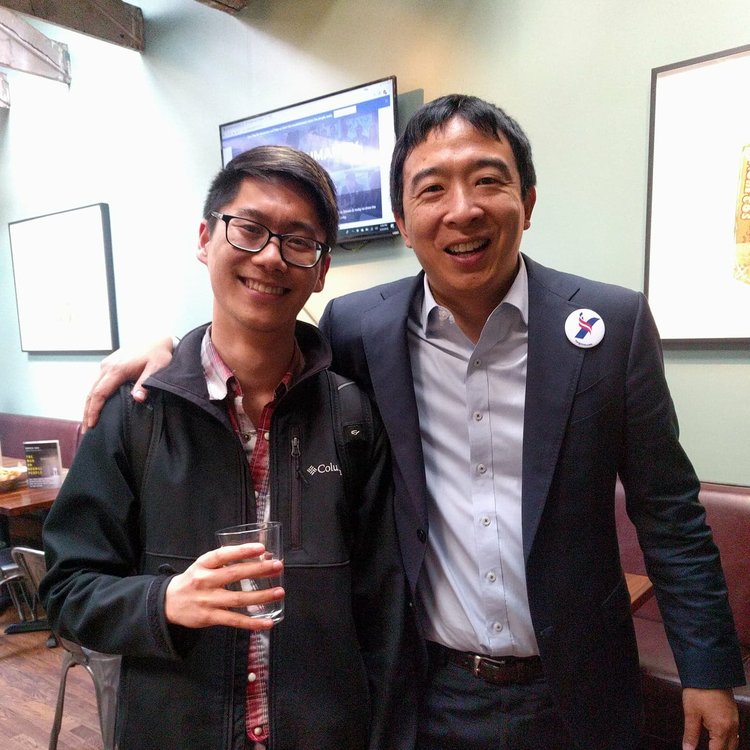 “Would you call me a Transhumanist?” he asks. But I think this is something that he needs to decide for himself. He is, however, definitively technoprogressive. The primary plank on his platform, his “Freedom Dividend” (named thus, he jokes, because it tested well with people on all sides of the political spectrum) of $1000 a month to all adult citizens, is a direct response to the job losses caused by automation, now, and in the near future. Indeed, the reason for his bid for presidency is due to the lack of a plan to address these concerns in DC. “I will become the plan,” he says. Beyond the Freedom Dividend, many of his other policy positions put an emphasis on investing in technology and especially, understanding technology’s effects on people – a cautious optimist, as far as technology is concerned.

People filter in slowly, most giving Andrew hugs, a few, handshakes. Most attendees of this small gathering, it seems, are friends. Servers wander around and between mingling groups, ceviche tostadas and bruschetta at the ready. A margarita bar sits in the corner of the room, and specialty tacos adorn a table along the wall. We are soon gathered in a semicircle around the room as Andrew takes the stage.

He gestures to the screen behind him and an introduction video begins to play.

Andrew speaks at length about his universal basic income (UBI) policy as well as his slogan, “Humanity First”, and how it translates into his policy platform. Andrew plans to change the way America measures its progress by adopting such measurements as childhood success, median wealth, incarceration rates, and more, on top of the existing measurements of GDP and job statistics. He also plans to implement a system of digital-social currency for “doing good things that normally don’t have dollar values”, such as volunteering for one’s community or starting a book club. The credits can then be used redeem discounts or experiences in much the same way that credit card points are used. He believes that this credit system will help improve social cohesion and increase civic engagement.

But I have seen all of this before on his website and have even explored it in another article. I came here for a purpose, and as the floor is opened up for questions, I seize my chance.

“What are your views on longevity research?” I ask.

Andrew Yang responds. He is supportive of longevity research, but believes that it does not need much public support. Citing the efforts of Silicon Valley elites, he asserts that private interests will support longevity research naturally.

“And what are your views on the regulations around illegal and controlled substances for the purpose of research?”

Andrew initially misunderstands this question as a question about marijuana (which he supports for recreational and therapeutic use). Having botched the question initially, I follow up with him afterwards, mentioning the difficulty that researchers run into with the National Institute on Drug Abuse when trying to acquire controlled substances for their research. He tells me that he is very much supportive of research and is strongly against blanket criminalizations.

With the questions that I had come to ask out of the way, I wander over to the bar in the corner of the room and grab a margarita.

Keith Yu is a Bay Area-based research scientist working within the biotech industry.